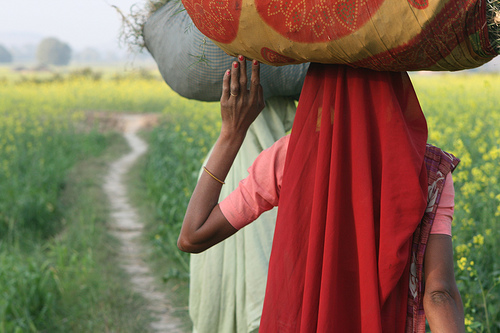 My boyfriend built me a spice rack this weekend.

Not just your standard turntable or ledge, but a triple-deck vertical tower on tracks that slide cooking arsenal right into the casual reach of your left hand while the right, at the same time, can conveniently keep stirring, chopping, firing or flipping.

It’s beautiful. And at first glance my sentimental pinch was the memory of moving into this house: As a fitting right of passage, we spent the first three days touching every ledge, every corner, every sill and unfortunately even some spots on the floor of our new old house – with a fresh coat of paint. And on the fourth day, I opened up our empty cupboards and decided it was time to go to the market.

The spice isle – however, is no place for budgets. Especially for a girl who always opts organic. And as I held the pretty glass bottles in my hands while coveting the entire shelf – I irresponsibly decided it was worth the purchase on credit and impulsively selected my top seven. For some girls it’s shoes. For me, it’s spices. When I got home, I proudly lined the seven glass bottles up on a bare shelf. While they indeed, looked rather lonely, I was totally content. And I swatted away the day-dreamed vision of a one-day full shelf — it was simply too far into an unseen future to try to squint at.

“Look babe!” he shouts. And he has chosen the right girl for his heart, for I swoon for the sliding piece of art that he demonstrates. Our eyes meet, and no discussion is needed, as we both reach for the old shelf that once held only seven. As he begins grabbing fists full of clanking green, yellow and orange glass bottles – and hands them down to me – we begin lining them up according to favorites and frequency of use. The rack quickly fills and we’re left, still, with a pile on the ground. Doubles! And time and money hidden in the recesses of overlooked excess. Oh well. We store the duplicates back into the cupboard where they can wait their time and then turn our attention to marvel at our, now complete, creation.

My guy, ever the artist, is always more interested in the process than the result – and his ADD quickly moves him elsewhere. Yet I continue standing stalled in wonder. And suddenly I realize that I am overwhelmed with an enormous amount of emotion. Too much for a simple spice rack! Am I overlooking something here?

And so I look closer…

First, there is always garlic; number one on the shelf in its sea-rock-salt and organic cilantro variation. And I remember when I actually peeled my first garlic bulb, in Guatemala – where I learned the trick to the proper heat in Guacamole comes not from pepper, but three crushed cloves for every one avocado. (And don’t you dare forget to leave the seed in the spread to keep it from going brown.) Since then I have never less than tripled the call for cloves in any and every recipe calling for the ingredient. I also remember my Ladahki Himalayan guide, Rigzin-ji, offering me a raw slice to keep the parasites at bay and health as high as the attitude to which we were escalating. We’d chew fast, swallow whole, and snicker as our student group ducked from the aim of our laughing fire. And then there is also the day this summer that one of my best friends and I spent working at our local CSA; digging up the bulbs planted nine months prior – and giving good but ugly attempts at braiding their soft stems into something to catch the eye of shoppers at the farmers market.

Ginger, in its powdered form, is intentionally neglected. But I remember my first root – at a Buddhist retreat center, where hot ginger lemon tea was the only distraction allowed from the observance of our minds. What a holy relief it was – to marvel in the human luxury of taste, when your brain was put to the task of judging everything else equanimous. To Ginger, I will always be indebted.

Basil, a bottle also growing old in un-use. Basil was my first window-sill herb; a single plant, picked up totally on whim, as I was leaving the grocery store about five years ago. I put the tiny stem with only a few leaves in the sun of my kitchen window. And I could not believe, that ALL it wanted of me was a little water and that sunny sill. In return, I could pull off a leaf or (even) two a day – to toss in my omelet, sandwich or salad. When I left for India – I called my best friend and asked for her to pick it up and love it like I had. When she confessed, a year later, that she had forgotten to get it when I left, and picked it up, weeks later, dead – I almost punched her in the face and then fought the urge to cry. Who knew that such a tiny plant could become my “giving tree” of the famous storybook? And I am still grateful, for the seed of love that basil plant sowed in me, which has since, grown into the greenhouse and window sills now hosting, among much more, 4th generation basil grandchildren.

Cinnamon. For the purpose of how many teas and stews, from Senegal to India, have I used motar and pestle to crush these spicy, sweet sticks as the offhanded task by host mothers trying to keep me busy while they chatted off my ear in languages I was struggling to grasp? The slow building of these rock-relationships warmed me even more than the hot tea.

Braggs. Okay. Not a spice. But an amino acid quite directly attached to the six months of my life devoted to the political, health, environmental and spiritual experience and study of Veganism. It was living in the Planet Drum volunteer house, on the coast of Ecuador – where I smashed cacao fruit seeds into the paste of vegan chocolate and learned the delicious joys of Brewers yeast, Braggs and the other best friends of all vegans and the uber food conscious.

Toasted sesame oil. Which to me is exactly the taste of my short English teaching stint in South Korea. Which leads me down the trail of a fail-less giggle, in the memory of an assigned task to a group of 6th graders to draw their favorite food – and them each, in a row, standing up and proudly demonstrating the unanimous favorite: the fermented red cabbage, Kim Chi.

A bottle of bay leaves; a single one remaining – that will soon, like the others, be tossed into an Indian stew in the pressure cooker – whose screaming hissing used to send me running to the far edge of kitchens. Now, with Indian second nature, I confidently tap with my wooden spoon to release the steam while sending our dogs and cats into retreats under beds and outdoors.

Lemongrass. Occasionally put into a green or yellow curry – but let’s face it: Thai food in Thailand can simply never be replicated. And then there is the lemongrass tea that I will always remember as the drink of my desert. After spending 12 hours wandering with the spirits in the sacred Vilcabamba Valley on the cactus juice of San Pedro — being parched from having traveled the life cycle of a water droplet till the shaman chanted and dropped a sunrise of lucidity back upon earthly life — it was lemon grass tea that brought the grass back under my feet.

Turmeric. More medicine (in India) than spice, healing the joint pains of a sister, but whose miracles I haven’t yet directly discovered myself aside from the flavor of my lentils and the yellow stain on my cutting boards, finger nails and unluckier items of clothing marking the memory of house-warming dinners past.

Rosemary. Poor rosemary. Our first plant was sacrificed to the spider mites – before we looked closely enough to realize that you don’t have to be big to have bite. Poor rosemary sits, now, composting over my wooden gate – while another, started from seed, took a slow three months to sprout and still doesn’t look overly eager for the task of growing. In the meantime, a glass bottle of delicious needles tends to our sweet potato root roasts while we patiently await your eventual maturity into a season of giving.

Cayenne pepper. We tend to abuse you on our attempts at Thai. And then there is our pepper plant, upon which now hangs at least 50 peppers in shades of green, purple and red. Yet remaining a dangerous mystery is your hierarchy: who is more powerful, the 4 inch green ones? Or the 1-inch red ones? Or the 2-inch purple ones? Showing no consistency would, now that I think about, be quite in line with the character of this fiery-tempered plant. So we use the glass bottle when we don’t want surprises and we pull from the plant if we’ve already had a glass of wine or two.

Pepper-All Seasoning: this is the Mac & Cheese of my spices; the ultimate in comfort food! Stolen directly from my Dad’s spice rack – this old standby got me through college on micro-waved potatoes (gross) and still blackens an occasional wild salmon today (delicious). When my dad stocks up – he always does so in multiples of 4 – including one for each of his children for the one that will remain when the rest are stolen from his house.

Mustard seed: I never use. But the rural Indian village to where my mind and body always wander when my most vivid memories are sent to pasture – is one that swims in a sea of yellow mustard fields where we take shade under mango trees while sucking on the stalks of sugar cane. In mustard seeds too, there is, one of my Indian host mothers heating up her pot full of sizzling mustard seed oil, till she tosses in some seeds whose precise cackle tells her if and when it’s ready for the onions. I still don’t speak the language of boiling oil – but will be forever mystified by this Indian woman fluency. 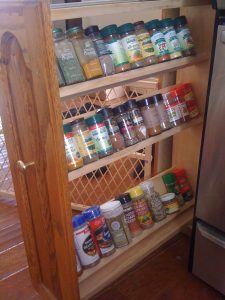 I haven’t yet even spoken of Cumin, Garam Masala, Nutmeg, Pepper, Cardamom, Clove or Cilantro (Oh Cilantro!). But maybe now you see, as I did, how this display of spices put together a storyboard of memories worth a wet eye of appreciation and love for the people and places that have flavored my life.