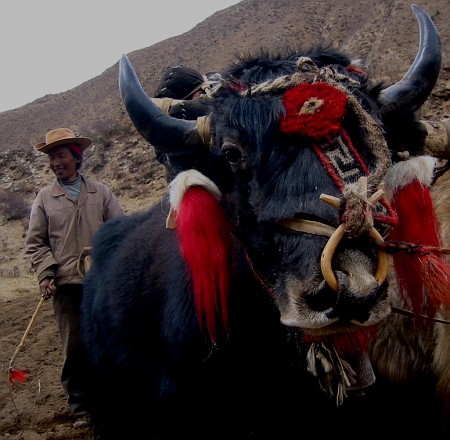 I take a deep breath, hold it, and step into the dank room.

(When the students ran into our shared room an hour earlier and exclaimed, “It’s the most foul thing we’ve ever seen in our lives!” I laughed. I’d heard the rumors of hell realms to be found in Tibetan toilets, but really, could it actually be so bad?)

The answer I immediately realize is….

I take a cue from the woman in front of me. We veer away from the three piles in the ground that once, in their younger inverted lives, constituted squat toilets, and instead do our business in an undesignated, but somewhat “less” crap-cluttered corner of the room. On my way out, I silently put a big gold star on the map and congratulate, “Tidrum, Tibet” on its new toilet foul-weight title.

Luckily the air outside is cool and delicious. I fill my lungs on it till they are sufficiently full and free of the desperation that 4, 325 meters of height above sea level can pressure on the chest of a foreigner to altitude.

Breath and being lassoed back in, I gather myself and start to stroll back down the wooden row fronting a dozen small guesthouse rooms. On the way I pass an elderly Tibetan woman whose arms are occupied with a large metal pot. As I pass her, she stops, sticks her lips out at me and then gestures her mouth (with a small grunt) towards the door. Thinking she wants me to open the door for her, I move for the handle, but before mine makes it, another hand suddenly swings it opens from the inside and the woman and her pot, like a sliding subway door, quickly close me in.

“Tashi Dele!” I stumble in and say with an extra warm smile in dire hopes that the Braille of my facial gestures will be able to communicate that which my limited Tibetan could never.

Surprisingly unsurprised smiles spread across the cracked and tanned Tibetan faces of the three women in the room. They return my greeting and then one, in excited chatter (that we in the West are only familiar with because it is the language of the Ewoks in Star Wars), says to the woman with the pot what I imagine to be, “Oh look what you’ve dragged in! A little treat for us! Isn’t she sweet?! Well, let’s get to work ladies!”

(Now would be perhaps a good time to explain that because the Tibetan Plateau dips below nothing less than 12,000 feet, and due to the lip-cracking dry and coldness of this region, vegetables have never been able to be coaxed from their cozy little seeds. So, with virtually nothing growing from the land for centuries, society, and particularly diet, instead centered itself around that which could sprout, stand and sustain — the Yak. These burly, altitude-loving beasts provided not only powerful labor but also warm clothes, rainproof tents, blankets, meat, milk, cheese, butter and whatever else Manslow used to fill in the basement of his hierarchy of human needs. Essentially, for Tibetans, the Yak was a gift from heaven and a dream of sustainability realized. And thus, a piece of this holy pleasure is the first thing any gracious Tibetan is to offer a respected guest. Leading us back to the warm room where our guest from the West… is living a Vegan’s worst nightmare…”)

Paraded on pretty plates, and unveiled with pride and the gentle pushiness that all Tibetans have mastered, each and every Yak delicacy is placed on my lap and offered in genuine kindness to me.

I bow and shake my head while repeatedly begging, as kindly as I can, to politely decline. But the trays of body parts keep emerging from cupboards, and under beds, and out of tins, and unveiled by cloths and brought in from neighboring rooms… until finally, in my despair, I give into a pathetic round of caveman charades where the message, “Me no eat meat” is perhaps successfully been made clear, but in its perceived inherent absurdity, certainly not understood.

With the hosts and the guest both emotionally exhausted from the lack of exchange, one of the women makes a last jump up and moves to the stove where the big pot has left her embrace and found an even warmer home on the fire.

Trepidation, dread and surrender all at once engulf my gut. This is it. I know it. I’ve used my full deck of “no thank you” cards. With not a single decline left in my hand, and confronted with only the most serious of a, “only Yes cards accepted here” sign hung in her eyes, the woman returns to me with the most monster-sized tumbler of Tibetan Yak butter tea I’ve ever seen.

I smile and accept.

And in unison, a sigh settles across the room.

(Hot yak butter tea. Listed as number two on Lonely Planet’s “Top Ten Worst Experiences in Tibet,” and the only drink brave enough to put its literal gut reaction right into its own name, is the ultimate staple of the Tibetan diet.)

I sit, with a thermos full of, and three sets of eyes steady on me and my, Yak butter tea.

I do not sip. I gulp. Large, hot, salty, buttery chugs. Determined not to allow any little drops to loiter on the more sensitive taste receptors located on the sides of my tongue, I shoo it all right onto the red express way, with a one way ticket, headed straight, and as fast as possible, down.

There’s no time for hesitation here. For as the guidebook has warned me, there is only one thing worse than hot Yak butter tea; Taking first place on the Tibetan terror top ten list, beating out both squat toilets and rabid ranch dogs, sits the fermented and solidified, COLD Yak butter tea.

And I can see it! The top layer of the tea visibly cooling and forming into a chunky yellow film right before my eyes! Like the frozen lake Nam-tso that we just visited, jutting glaciers of Yak butter are reforming and solidifying into something that I’ll soon, if I’m not fast enough, have to chew!

I grab a homemade, sweet cracker from one of the dozen tins that’s been placed in front of me and take a bite in order to aid in the washing down of another large gulp of tea.

The women, content that their guest is finally both drinking and eating, finally recline back into their beds and flash each other smiles of success and satisfaction.

The women are very happy now. One jumps up, throws a shawl over her shoulder like a sari and starts a little happy dance in the middle of the room. We all giggle. The shawl falls off in the dance, and when it does, instead of picking it up she looks down at her chest, lifts up her breasts that have been lowered with the love of a good fifty years of age, and looks at me with a disappointed frown.

“No good,” she shakes her head and says in her limited English.

And suddenly her hands are on my chest. As she squeezes and smiles her approval of my body’s youth, I do one of those amazing flips of consciousness that leave me swirling in a whirlwind of dizzy stars and wondering…

“Is this all really happening? Or do I really live in one marathon showing of back-to-back reality TV comedy shows where the candid camera-man has yet to wave, catch my attention, and let me in on the joke that is called, “My Life?”

I look for the camera in the corner of the room.

I look at the smiling face of the woman standing a modest grabbing distance from me.

All the women, including me, burst out laughing, as she lets go and resumes her happy, little jiggy across the wooden floor.

The antics, the charades, the dancing, the laughing and the language-less exchanges continue.

I’m so busy giggling, laughing, miming and smiling that it’s not until a quick hour has passed before I look down and realize that my entire tumbler of Yak butter tea has mysteriously and unconsciously disappeared.

I smile to myself and note that while “hot” and “cold” Yak butter tea may rightfully assume their places on the top-ten Tibetan travel “terror” charts, Yak butter tea, warmed to just the right temperature by the graciousness and kindness of dancing and bust-grabbing company, has forever earned and secured its place in my personal hall of memory fame.