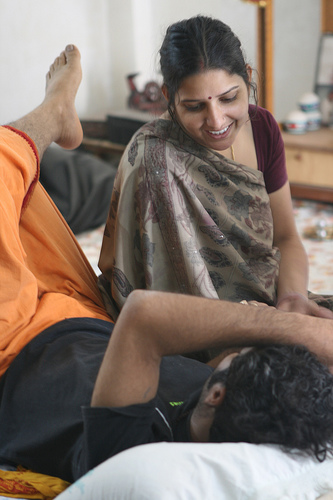 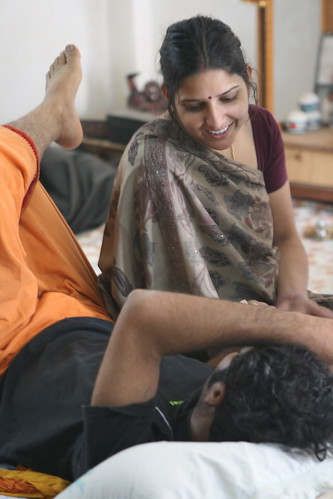 One of my students recently quipped, “…arranged marriages give me faith in marriage.”

And as quickly as I agreed with her, I wondered, “what a once-foreign idea with which I have so naturally nodded my head in agreement!”

It’s one of the subjects on India of which I find to be the fullest of misconceptions and unfounded, ethnocentric judgments. But I never wag a finger at a new student of India when he or she comments, “Can you just imagine?! Not marrying for love?!”

Because I know my students will soon enough be living with Indian families, surrounded by Indian brothers, sisters, fathers and mothers. And that each of these family members will have his or her own story to tell which will illustrate that there’s a lot more hidden variables in marriage math. I have enormous faith that my students, too, will not just learn, but witness that Love, in the East or the West and regardless of method, is still just as likely to find itself on the other side of the equal sign in the wedded equation.

My first Hindi teacher is 24 years old and was married last year. Aside from a 1×1 inch passport photo, he did not see the face of his bride until after his marriage to her. My second Hindi teacher has been happily married for 41 years. He didn’t glimpse even a photo of his wife until hours after the wedding rituals were completed. What do these two men and generations have in common? A respected cultural tradition that accepts and pursues (with great faith) a committed and self-sacrificing investment in the lifetime partnership of parenthood.

I’ve visited and shared meals with both families. The young couple is no less caring, loving, and challenging-yet-functional, than any of my friends’ young married relationships. The older couple has not a single less story of compassion, sacrifice, tolerance, perseverance or tender love than that of our own Western parents.

What my student was saying is, “if people here can have perfectly successful and loving (arranged) marriages with someone they don’t even know, doesn’t that mean that opportunity exists for ANY two persons?”

(Whether we actually have an advantage in being able to choose our partner is then what becomes debatable!)

Let me provide two interesting linguistic examples that illustrate some of the differences on East and West perceptions in regards to their definitions of two of life’s most important social pillars; I’m going to start with “religion,” but stay with me as I’ll then return back to, “marriage.”

Hinduism in India is actually not as much a religion as it is a culture and way of life. Even the name, “Hinduism” was originally only a term created to characterize the, “people of the Indus Valley.” So essentially, it was a name invented by outsiders to categorize a group of people with a different “way of life” in order to differentiate it from their own.

If you you keep this definition in mind, it begins to make sense why there is no word in its scriptures or pressure within the “religion” to cultivate the spread of Hinduism. Nor can one, even of his or her own choice, really “convert” to being a Hindu. And finally, this would also perhaps provide logical reason for why there are no historical accounts of war or violence in the name of “saving” or “forcing” a group of non-Hindus to convert to practitioners of the “faith” of Hinduism.

For that would, plainly, be silly. It would be like Italians invading Montana and forcing them to make their pasta from scratch and drive scooters. Silly. And so if you translate religion to “culture” or, “way of life” then it makes perfect sense why on, more than one occasion, I have found different Indian persons challenging me with…

“What do you mean, you have no religion? Do you not have parents? Were you not born in a country?”

Because despite my soft claims that, “I chose to stop being, practicing and calling myself a Christian when I was 21,” this sentence is no more rational to an Indian than me saying, “I stopped being an American when I was 21.”

Let me interject my disclaimer now that this understanding is only my own; it’s a subtle and simple (and perhaps opinionated) observation that I’ve only hypothesized from the confused pauses before, after, and between sentences.

But what I was getting back to was the topic of marriage, and the link between the above example and the next, is only the similar confused pause at the end of the sentence…

“What do you mean you’re not sure you believe in marriage?”

For just as religion equates to culture. The term “marriage” is easily transferable with the words, “life” and “family.” And to challenge the existence or desire of marriage is quite equivalent to denying the existence of life or desire for love.

Now I can hear someone in the audience stirring in their seat and raising their hand with the following question: “But what about dowries (a type of early inheritance or investment paid to the groom’s family by the brides), and the fact that not only is the marriage arranged, but that the bride is little more than sold, for a price, to the most appropriate bidder?”

Well. I certainly do not doubt the likely correlation between the social construct of dowries and the social norm of preferential sex selection and even female feticide. But as is often the case when I investigate a stereotype or preconceived idea and begin to explore the more intimate details of the (Indian) relationships near me, I hear quite interesting stories.

Like that of my best friend here in India who, even as a Brahmin (the highest caste and often demanding of the highest dowry), accepted only a single symbolic rupee (equivalent to about 2 US cents) in dowry for his arranged marriage to his wife. And of his and his wife’s relationship, I can say that I would truly be tried to find a more accepting, self-sacrificing, committed and loving relationship than theirs on any continent. (Would you know by witnessing the tenderness in the above photo that there’s a 3-year old screaming for a toy in one corner and a 1-year old trying to eat Vaseline in the other?)

I’m not out to prove anything. I only want it down for the record that, from my experiences here in India, I have gathered absolutely NO evidence that would lead me to believe that a “love marriage” has any greater chances for “success” (which would take an essay of its own to define) than that of an arranged marriage. And if you have any doubt or questions, I challenge you to find any Indian couple who’s been married for a few dozen years, and sit down and have chai with them and hear out their stories; of anxiety, of fear, of desire, of bliss, of routine, of duties, of immaturity, of overwhelm, of challenges, of loss, of self-sacrifice, of commitment, of pride, of trust, and of the continuum and construction of love. And I challenge you to see if that story is really any different from those of the elders of the country where you were born. And if you come to any interesting conclusions, I’d like to have tea with you too.