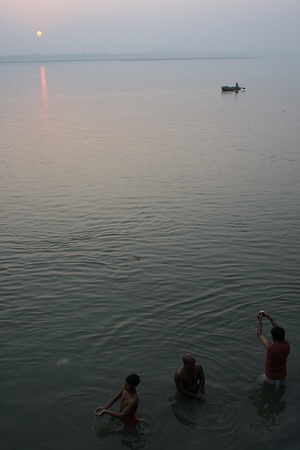 “To a western observer our civilization appears as all metaphysics, as to a deaf man piano playing appears to be mere movements of fingers and no music.” – RABINDRANATH TAGORE, India’s greatest poet, who won the Nobel Prize for Literature in 1913 “If a man can realize his divine nature with the help of an image, would it be right to call that a sin? Nor, even when he has passed that stage, should he call it an error. To the Hindu, man is not travelling from error to truth, but from truth to truth, from lower to higher truth. To him all the religions from the lowest fetishism to the highest absolutism, mean so many attempts of the human soul to grasp and realize the Infinite, each determined by the conditions of its birth and association, and each of these marks a stage of progress; and every soul is a young eagle soaring higher and higher, gathering more and more strength till it reaches the Glorious Sun.” – Paper on Hinduism, At the World’s Parliament of Religions Chicago, 19th September 1893 “Science is nothing but the finding of unity. As soon as science would reach perfect unity, it would stop from further progress, because it would reach the goal. Thus chemistry could not progress father when it would discover one element out of which all others could be made. Physics would stop when it would be able to fulfill its services in discovering one energy of which all the others are hut manifestations, and the science of religion becomes perfect when it would discover Him who is the one life in a universe of death, Him who is the constant basis of an ever-changing world, One who is the only Soul of which all souls are but delusive manifestations. Thus it is, through multiplicity and duality, that the ultimate unity is reached Religion can go no father. This is the goal of all science. All science is bound to come to this conclusion in the long run. Manifestation, and not creation, is the word of science today; and the Hindu is only glad that what he has been cherishing in his bosom for ages is going to be taught in the more forcible language and with further light from the latest conclusions of science.” – Paper on Hinduism, At the World’s Parliament of Religions Chicago, 19th September 1893 “To the Hindu, then, the whole world of religions is only a travelling, a coming up, of different men and women, through various conditions and circumstances, to the same goal. Every religion is only evolving a God out of the material man, and the same God is the inspirer of all of them. Why, then, are there so many contradictions? They are only apparent, says the Hindu. The contradictions come from the same truth adapting itself to the varying circumstances of different natures.”– Paper on Hinduism, At the World’s Parliament of Religions Chicago, 19th September 1893 “The Hindu religion does not consist in struggles and attempts to believe a certain doctrine or dogma, but in realizing – not in believing, but in being and becoming.” – Paper on Hinduism, At the World’s Parliament of Religions Chicago, 19th September 1893