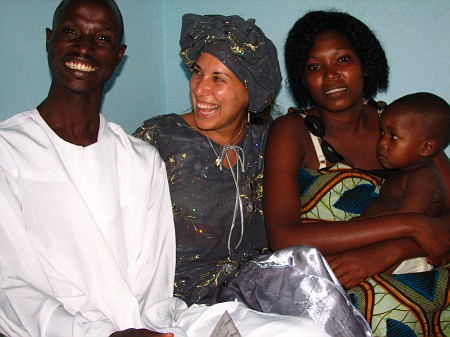 (Playing Part in the Diallo Family)

The fact that our food is thirty minutes tardy is hardly given a wink of conscious thought; our mouths full, with the gossip that spans the months between this and our last reunion, leave little room left for hunger.

Our layers of excited questions and answers are continuing to stack themselves like a deck of cards in the center of the table when one of my girlfriends, with the effect of jack-slapping the deck, asks me a question that breaks the pattern of exchange by giving me pause, “…but HOW did you GET out there?”

She’s referring to the story I just told where I placed myself near the border of Guinea and Senegal.

I’m caught off guard with the question and feel my eyes look up and search the left corner of the room where they seem to think they’ll find the answer.

And I DO find the appropriate vision; I step immediately into an especially thick memory; I can feel it and smell it, but find myself in an awkward dogpaddle in search of the right words to buoy the description.

Three heads crook their necks at me like kittens watching a swaying string.

The four heads crook to watch the string sway to the other direction.

And then I can feel it coming. It is not particular to this audience, this reaction. And it’s nothing I ever take personally. But I can sense the difference between when a story of mine is worth exploring for explanation and when the audience is about to opt to sweep it under the, “maybe next time we’ll go there” rug.

As predicted, with only a second of silence the conversation card is swept, the deck re-dealt, and new topics fly across the table again.

I’ve since left Portland, but I find that I still hold the card and question.

While on the road, I rarely have time to compose complete-sentence thoughts. Instead, I scribble down quick lists of words that I know will conjure up the essence of a particular moment, observation or realization.

So I pick up my most recent travel journal, flip to the Senegal pages, and find the following listed under the word:

Now I look over this list, feel the weight of multiple paragraphs under each item, and wonder how I could have possibly come up with 15 chapters for one taxi ride. At the same, I think this underscores the depth and layers of my every interaction with Senegal. And I hope that the following chapters will give those observing just a wink of insight into the power of my interactions with the country and people of Senegal.

So with no further hesitation, and over the course of a few posts, I will attempt to answer my good friend’s question, “But HOW did you get there?”

pride in a name

The first time I see Mbouille, his huge smile is framed by a taxi window that, for his overwhelming excitement, he looks ready to jump through.

He grabs the shoulder of the driver and shakes it until the taxi halts and then jumps out of an almost-still-moving car. He’s carrying a crumpled up piece of paper and as he shakes my one hand with two of his, I can see he’s doing all he can to resist hugging me. His wide smile extends mine to its own limits and I burst into laughter when he unfolds the crumpled paper to reveal a blown-up, black and white picture of me that he has downloaded from the internet as an aide to my identification.

What I don’t find out until weeks later, is that Mbouille has traveled at least three hours out of his way, transferring at least four times via different jam-packed forms of public transportation, just to greet me upon my arrival in Dakar. What I also don’t understand until later is that this is a traditional African approach to welcoming a guest; I am not just a “friend of a friend”; I am family. And I am not just family; but treated as royal family. There is nothing this man won’t do to show me how special, accepted, revered, and respected I am.

“We must give you a name!” he declares (for in Senegal, you are nothing without a Senegalese name, which defines your place in society) and thus he gives me three choices for a first name, and one choice for a last name.

“Maimuna Diallo!” he appoints me with great pride.

What I will learn over the course of my travels, is that Diallo is a highly respected name in Senegal. One of the few sentences I learn in Woloof (local language of the Northern half of Senegal) is how to introduce myself by this name. And although a few of those to whom I introduce myself will insist I change my last name to theirs, all will ultimately concede, “Yes. It’s a very good name you have,” and many will shake my hand with increased eagerness and proclaim, “I’m a Diallo too! We are family! You are my daughter/sister! Please sit. Please eat. Please stay!”

Mbouille takes me to his house in the neighboring city of Thies to meet my new family. I intend to stay only two days with him, but by the time I leave his house, 8 days have passed: his beautiful wife has taught me how to cook Senegalese specialties, his older sister has shown me how to sway and grind to Senegalese music, I have taught English to a group of his students in one of the schools where he teaches, he’s organized my adventure to help harvest peanuts in one of the fields outside the city, I’ve bathed his babies and snatched the broom and other chores away from his younger sister, his family has served me all the choicest morsels on every dinner plate, and the women of the house have taken me to a tailor and helped me pick out a traditional Senegalese dress for a weekend wedding of which we all, as a family, attended.

At the end of the week, Mbouille no longer calls me “Maimuna”; he now addresses me as “sister.” As there are few men that I admire and adore more than this one, my eyes well up with pride when I am allowed to return the respect and love by addressing him as, “brother.”

Never in all my travels in the world have I been welcomed with such warmth into a community, culture and family. If there is any one thing that I have, so far, learned that sets African culture aside from all others, it is this intimate integration of community and family; the two being one and same.

So how do we get from here to the bush taxi?

My story starts here because it is Mbouille who wakes me up at 5am, from the bed that I share with his little sister, to whisper the following:

“Come sister. I must get you on the first taxi that leaves this morning. And I must organize the price so that they do not rip you off. And you must call me every day after today. Are you sure you must go? Please stay, Maimuna. Okay. Okay. Okay. I know you’ve already stayed so much longer than you intended. If you insist, Maimuna. But come; let’s go. It will take you a full day to get where you’re going and we must go right now so that I can assure that you travel with a safe driver and nice people and for a good price. I don’t know why you want to leave me sister. But I suppose you have to go. Okay. Okay. Okay. I know. You have to see the rest of Senegal. Let’s go then to the taxi stand, sister.”