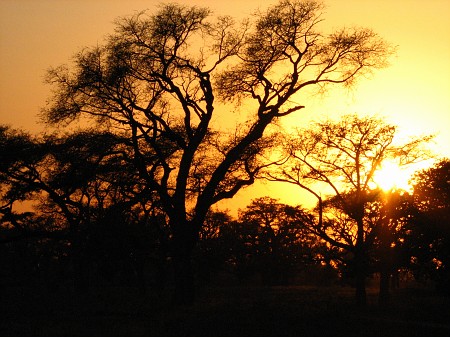 “So where are the peanuts?”

And it was mine as well as I waded through a knee-deep sea of weeds toward slumped shadows seeking refuge, from a strong Senegal afternoon sun, in the shade of a Balbao tree.

A moment earlier, the bush taxi had stopped and the dust of the dirt road mushroomed in delight of catching up to the car. Mbouille, late for the class he was to teach in the rural school, had only time to stretch a long arm out the window and point, “Those are the peanut farmers. I told them you wanted to work with them for a day, so they know you’re coming. I’ll see you at lunch? Have fun!” The taxi lurched and the dust took to chase again.

Now I bring a hand up to my forehead and squint in an attempt to better define the shadows under the tree: two men, one bigger, one smaller, both casually watching me back and guessing at my own outline.

As I approach the tree, it reaches a kind branch out to block the glare of the sun and this has the effect of turning on a light. When I enter the shade walls brimming the house of the Balboa, my hosts barely move. The older man is leaning his relaxed body against a type of shovel, chewing something slowly in his mouth, and there is no pause indicating that my arrival has been noted. He just looks at me and chews. The other does not move either, but his eyes, filled with youthful curiosity, betray him. I’m not an accurate judge of age in countries other than my own, but my guess would put him somewhere in the mid-teens. I wonder if his identical response to my arrival is mimicked or inherited.

The older man shifts his weight from the shovel to his legs and the boy, less suspicious of the stranger than his superior, is excited by the permission to move. They both take a step towards me. I say my Senegalese name and reach out a hand. The older man says his name, puts the shovel into my open hand, and walks out the shade-door of the Balboa.

No longer under supervision, the boy smiles a toothy grin and tries out three lines of surprisingly good English. I compliment him on his language skills and he shrugs embarrassedly. I respond by confirming that he speaks more languages than me (Wolof, French and English) and this makes him blush and kick the dirt.

I squint outside the shade of the Balboa tree and ask, “So where are the peanuts?”

The boy looks at me blank. He calls to the older man in Wolof, who turns around and gives me the same incredulous look. Then the man waves for me to take the few steps out from under the tree to join him. He takes the shovel from my hand, gives it an expert shove just under the dirt beneath the weeds that were just scratching up my shins, and turns up the roots, along with a jumble of dusty and curvy nuts, right upon my feet.

(Visited 60 times, 1 visits today)
a day in the life peanuts