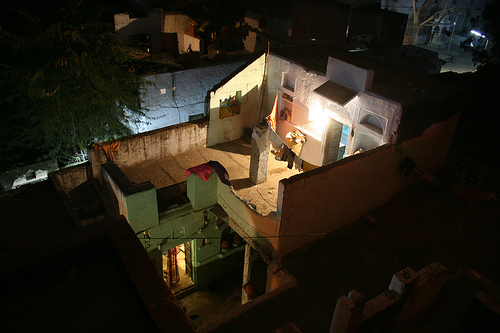 For most Westerners, it’s unfathomable for a major city to function without 24-hour electricity. Yet like the monsoon rains on their mission to Ganga-ji (respected river), the 1.3 million people who live here in Varanasi somehow always manage to redirect, divert, finagle and finesse around the obstacles of 10 powerless hours, to fluidly find a way to go about their day. And despite the fact that the electricity has gone off TWICE in the typing of this single sentence (once for 3 hours, once for 20 minutes), I’ve never heard a native complain. Hold on. I have to “save.”

Three hours ago, my resolve to sit down at this computer and write till something came out was as strong as the espresso I shot to chase it. But the power outages, along with missed trains and traffic jams, prepared yet another alternate reality and route to amble along. So now I’m back at the blinking cursor, but the caffeine I fired up with four hours ago has stopped doing jumping jacks and crashed on the couch. Being the hated type that jumps out of bed at sunrise, I now write from a slightly sleepy and somber mood; why not? Let’s try something new.

No one knows what I’m doing these days; neither my family nor friends. So if you fall into one of two former categories, don’t feel left out, because much like Varanasi, everyone is in the dark. So it is with the purpose of filling in this gap of trivial yet missing information that I chose the content of this update. Also, my fingers are still stiff with bed rest, having spent too much of the last month turning many pages (of books and in life) but not outputting much in the medium of type. *save*

So what am I doing? I’m squinting my eyes and wondering myself. And that is because I don’t do very well without two-page checklists to reference. Ah, yes. So, it’s something I don’t think I’ve ever confessed to, but certainly responsible for 74% of my life successes: I’m a relentlessly effective multi-tasker and organizer. (My sister, in an email today, made reference to this same quality that we’ve inherited by blood from my mother as, “itchy butt syndrome”; I laughed for 10 minutes.) This, as all our best qualities are, is a sword; the other edge being that in the process of my ruthless swinging around, I am often negligent of emotions, people, creativity, alternatives and details that I arrogantly slaughter in the name of producing the fastest and highest yield. (And I call myself a vegetarian.) As my co-leader recently wrote of me in my evaluation: “…she just needs to remember that there is more than one (i.e. her) way to get up the mountain.” So wise and true. And there are just as many ways to get around the mountain — meaning it’s taken me an impressively long paragraph to summarize the sentence: “My days are simple.”

My days ARE simple. Awkwardly and healthily, uncomfortably simple. Right now, I only have three daily obligations. And they are kind of interesting, so let’s go there…

Hindi Classes. This is, without challenge, my favorite hour of every day. And that is because my Hindi teacher, Virendra-ji, is perhaps, my favorite man in the world. And yes, I think this of a hundred human beings. But part of being a “non-dualist” (invented term) means that I can have as many “favorites” as I want (infinite); or at least that’s how I rationalize it in my world (also invented). *save* Virendra-ji is single-handedly responsible for every fluent (Western-born) Hindi speaker I’ve ever met. He is considered the most respected master and guru of language learning in the city – and I too will confidently vouch for him as the nothing less than the, Yoda of Hindi. The man reads minds. He handles Jedi learning and memorization techniques like a light saber. He employs your subconscious and manipulates it like play dough. And us poor, lowly, ignorant students – we are blind to the firm and expert rationale behind his magic-like tricks. You may not get it, but hardly I do – so how can I explain? I’ve never known a teacher to be able to entice the subconscious of a student into secret action. But he does it. He’ll strand an especially complicated sentence together (transliterated example: Nato mai shadi-shuda hung na mai, philhal, shadi karna chahati hung: Neither am I married nor do I, for the meantime, want to be.”) and instruct me, “Don’t think. You will understand this in three minutes. Just repeat. Now repeat again. Now close your eyes. Repeat. Okay, say it backwards. Now say it forward. Say it fast. Slap your hand on the table when you say the last word! Now tell me what it means in fluent English. Not broken English. Fluent English! Now say it fluently in Hindi, with confidence. Good. Next.” *save*

Bamboo Flute Class. The vision, obviously, is of a charmed pilgrim, skipping her way through the winding valleys of the Himalayas, singing back and forth to the little birds, all the while smiling under the whistle of her simple wooden flute. The reality, however, is eight neighborhood kids taking a collective break from their cricket game to inhale just enough air to scream at the practicing pilgrim, “STOOOOOOOP THAAAAAAAAAAAAAAAT!!!” It could be worse I suppose. Instead of scales and ancient, sacred Ragas, I could be murdering Mary and her Little Lamb. Either way, it’s bad. It’s very, very bad. And, to the recurring nightmare of my neighbors, it’s likely to be that way for still some months. My flute teacher however, is quite wise. He only gives me enough examples to take home for practice and then fills the rest of the two hours with warm chai and lovely chit-chat on the history, culture, and logistics of learning Indian music.

Brainstorming with Ajeet-ji, the visionary behind GURIA. Ajeet-ji is the lovely man I quoted a few posts ago from his speech aimed at elevating awareness of the flesh trade in India. I’m collaborating with him on a number of projects, all of which he groups into the single, endearing, category of, “high tech.” The projects’ task lists include collecting content, articles, photos, film and contacts for the purpose of furthering global awareness and sponsorship of the NGO and its objectives. We’ll see where it goes; it’s only in seed stage at the moment. But if you happen to be rich and reading this, and hoping to find an amazing non-profit in which to invest some money (with fantastic karmic returns), do email me: solbeam@gmail.com. There will certainly be more thoughts turning to print in future posts on the subject of GURIA as my involvement moves from seed to sapling. So rich or poor, stay tuned.

Wow. Maybe my days aren’t so simple? But they are. They are. I wake up at 7am (no alarm) and meditate every a.m. I have plunger coffee, brown bread and honey with a newspaper and Hindi conversation every day at the same place for breakfast. I go to my classes and then I read the same book (Indian Religions – The Spiritual Traditions of South Asia – An Anthology edited by Peter Heehs) while I sip on lemon mineral water and wait (1 hr) for vegetable paneer momos, on the same rooftop, every day, for lunch. I meet up with Ajeet-ji, or, in some crazy variation, venture on an exciting errand in the afternoon. And then I share my evening with my Indian homestay family, stop in for email on the way home, say goodnight to my landlord, review my Hindi vocab, crawl into my 0 degree sleeping bag, read a short story from Jorge Luis Borges, and fall asleep as soon as, sometimes before, my head hits the pillow. Occasionally, I wake up in the middle of the night with the intrusive and compulsive thought to recharge this or that appliance so that I, too, will be prepared for the 10 powerless hours of tomorrow to come.

And THAT, I guess, is what I’m doing.