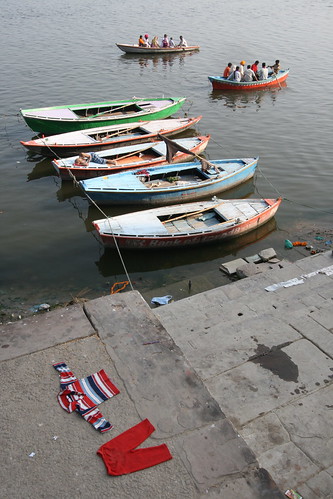 Not of the adventurous sort, but the meddling.

The petty. The flinching. The bothersome and be bothered by, sort.

The kind of thoughts that make you feel weak, and mean, and small.

The wind of the fan. The person that turned it on. The dogs barking in the street.

They ruffle. And annoy. And make my eyes squint and my breath shallow.

This is not the world I want to live in.

But that ruffling fan, and that annoying person who turned it on,

They push me out, onto the deck, and out of my little, petty world of trivial thoughts.

To a perch, where the real Wind playfully tosses my hair as a grandmother her stormy grandchild.

And despite even my annoyed resistance, my errant thoughts dissipate in the vastness of a world unwalled.

And a look over the edge.

Where boys play cricket and fight over who will jump the fence to reclaim the lost ball.

Where a wandering Sadhu walks barefoot in evening pilgrimage to the river.

Where a “subje wallah” pushes a cart of red peppers and calls out to the mothers who forgot the item on the list at the market this morning.

And where teenage boys sit side by side on motorcycles, holding hands, waiting to make an impression.

Where a vendor chooses a stalk of sugar cane, pushes it through his press, and fills a tumbler of sweetness to lure those that pass by into his shady corner.

Where a rickshaw wallah, through the mumble of his pan-filled mouth, proposes a cheap and faster ride to a walker.

Where a dog, unknowingly trespassing turfs, is attacked by barking calls of war, for his ignorance.

And where a black bull wanders lazily through the streets, while locals sweep long safe distances away from his horns and lethal legend.

Where a grandfather proudly strolls the neighborhood with his tiny toddler grandson in tow.

Where the school-bike rickshaw driver meanders his way home to retire the wagon, now empty of the children he’s safely returned home.

Where teenage girls twiddle thumbs and swing feet off the roofs where they are allowed to safely wander their imaginations.

And where white bed sheets and colored saris, warmed from the late sun, are pulled down from the rooftop lines and make last attempts at flight as their capturers fold them up for storage.

Where a grandmother shells peas on her porch, as she has done for 80 years.

Where a courtyard tree has snarled a dozen errant kites, now translucent with the sun setting behind them.

Where a “dhobi” carries neat stacks of pressed and clean clothes to houses where they’ll be received with great relief.

And where the multicolored scarf of a young student chases in quick step behind her.

Where signs and advertisements scream on alley walls, yet are muted to those illiterate of the Hindi script.

Where small children are stacked strategically, scrunched between their bookend older siblings, on the back of motorbikes.

And where hair plaits are oiled and braided on decks, in the lazy afternoon hour before dinner.

Like a headache, or stomach cramps, or a fever, I can barely remember my prior state now that it has passed.

And the Wind ruffles my hair again, this time, with consolation and compassion.

And muffles my mutters of wordy gratitude.

A silent bow of respect.