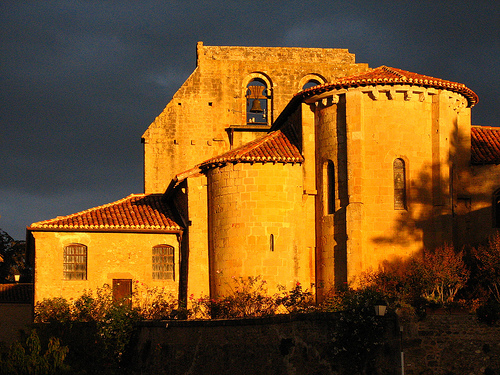 So where were we? Ah, yes. Eluding the croissant-pusher.

In Australia, I once learned that the Aboriginals used to track their way through the vast bush by secret songlines; riddles, in song format, of which each individual in a tribe held a single verse, and (only) when strung in line and sung in harmony, were these verses laced together to present an intricate map and lay of the land.

Now really, have you ever heard of anything so beautiful?

So while I’m certain our voices were never as skillfully in synch, we pilgrims also sang a song; more to the tune of rumor and gossip, but none-the-less, still an elusive code passed from pilgrim to passing-pilgrim, that functioned as a compass directing us, as a tribe of nomads united by common destination, across the country.

Having no maps, it was only on the note of one of these pilgrim songlines that, upon finding myself standing in front of a large painted arrow that clearly directed all down the hill – I turned right and walked up and away instead.

Having spent many months of my teenage years grounded and confined to walls of my dungeon-ous room, there was definitely a satisfying sense of trouble giggling somewhere inside my stomach; I had no food, no idea of the distance to the next town, no idea where I’d stay, and hadn’t yet seen even a single marker confirming existence of the rumored deviant route I fancied myself to be following. Yet something born of the womb of these unknowns was wailing with simultaneous relief and exhilaration; something whose unexpected cry led me to wonder if freedom was perhaps less about granted permissions, and more about emptiness of expectations.

But I have diverged from my divergence; let me get back to getting off track. 🙂

Sustained by this strange energy source, I walked with suspicious speed. Occasionally a colored marker and matching number would, in another tribe’s songline language, tell me — in a code I couldn’t read — exactly where I was. But as I have learned to be the grammatical structure of many universal languages, it is often less about the letters than it is the pattern they follow. And so on this pattern I focused, in faith of the rule of the universe — that every path leads somewhere, and where ever that was, would be where I was supposed to be.

About a dozen kilometers later, and on top of the dozen I had already walked earlier, the satchel of my enthusiasm for wandering without sight of destination waned. Approaching the summit of a significant little hill, I — hungry, tired and feet arches threatening to collapse — hoped desperately for a glimpse of something habitable on the horizon.

Now I am quite convinced that Southern France’s Chemin de Saint Jacques de Compestelle’s horizons present the originals of that which inspired the artists to sketch such likenesses into fairy tale picture books. And at the top of this hill, it was exactly those pointy church steeples, looming watchtower tops, windy cobblestone streets and chunky white-block walls – that made the 7-year old in me want to reach my hand out and touch the page. In my awe, it took me a minute – before I noticed that what really made the colors of this picture pop with vividness – was the darkly shaded, indigo blue, of the heavy looking clouds laying low in the sky, directly behind the image.

The sky was threatening to cry at any moment and I knew that if I didn’t pick up my pace significantly, I would soon be soaked in one of its more infamous expressions of emotion. A strong wind swept my way from the picture book page I faced, and with one huge ominous teardrop of water left splattered on my forearm, added the dot to the exclamation point following its clear warning and command.

(sorry! super busy! to be continued!)