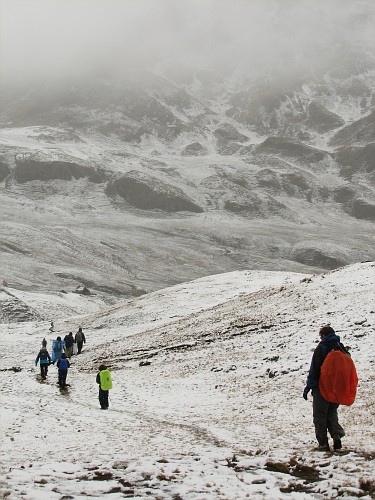 In my defense, I have to point out that it really should have been the responsibility of Javier and Jairo to inquire as to my personal definition of “favorable weather” before asking me to make the offering to the Apus. In consideration of their logistical roles as mountain guides, I suppose, for them, “favorable” meant something more to the effect of, “sunny and fair.” But as they quickly found out the next morning, upon hearing the unzipping of my tent and sequential shrieks of joy, was that the wish for weather that I had subconsciously raised to and requested of the Apus, had successfully been answered in the form of a snowstorm.

Javier begins to use the word, “blizzard” which I think is a bit of an exaggeration. Nonetheless, an earth- and heat-hugging layer of ice that formed overnight allows a lacy blanket of white to be thrown over every vista. The weather suits the mountains and mood well as not just me, but the whole group, is as giddy as if Santa himself were about to ride into our valley on a sleigh of a dozen llamas.

Our morning trek is delayed by the, “blizzard” and being well aware of which is the warmest tent in our party, I flap open the door of the kitchen tent, feign distress with bitter coldness and accept Enir’s insistence to sit on the stool next to him by the fire.

I adore Enir; there in nothing not to love about this man. And his smile and presence always warm me as much as the fire. I have already learned a little of his story: that he lives in a mountain village outside of Ollantaytambo, that he has three children but that his wife died years ago, that he speaks Quechua (the language of the Peruvian indigenous majority) and that he’s the best head chef in the Andes. I feel quite comfortable with him and finally ask him the question that is really on my mind…

“Enir. No one else is here. So now tell me the truth. What do you really think of tourists and the people that come to your country on these trips? Aren’t they arrogant with presumed superiority of their culture? And ignorant of the complexity of yours? And they come in these terrible hordes and leave messes and take millions of pictures and truly understand so little of what they are seeing and hearing! And then they invade your natural resources and are such ungracious guests. Don’t you think that we’re terrible? Tell me the truth.”

But Enir hardly flinches. He just casually stirs a pot of boiling vegetables and says, “Yes. They take a lot of pictures, but what harm is that? I enjoy my work very much. I love to be able to travel our country, and make people happy with our food, and share some of the most beautiful parts of my land, history and culture with others. In the off-season, when the foreigners do not come, that is when it’s hard and I work in the fields and find odd jobs to support my family. But this is very nice. I love living in these mountains and I am very happy to host those that visit my country.”

It makes so much sense that I’m bothered by the reply. I squint my eyes and try to discern if he’s telling me a story that he thinks will make me happy. But I look through him and find only transparency to uncluttered honesty. And so I turn the eye on myself instead and wonder how, why and when I became such a cynic.

But just in case, I decide to ask Jairo the same question. Nonchalantly, he responds in like, “Oh no. It’s not like that at all. We really appreciate that tourism is our main industry. I’ve learned English and soon I’ll be studying Chinese and it’s wonderful to be able to learn about other peoples’ countries and share with them what I love about mine. Machu Picchu was just named one of the seven wonders of the natural world, so we are very excited for all the people and business it will bring. What’s wrong with a photograph if someone takes it back to their country and shows it to their friends and family and tells them how beautiful our country, history and people are? Tourism is hardly the worst of occupations to dedicate yourself to.”

And isn’t he just exactly right? Are not his reasons the same as mine for why I work as a guide in the same industry? Do I not love opening doors to new worlds and escorting people through? And sharing in their enlightenment of the mysteries suddenly unlocked by the clash of foreign and home cultures? Is it not an equal exchange? Who is the ignorant and arrogant one to point her finger and claim exploitation when she knows nothing of it?

The lesson is a healthy humbling.