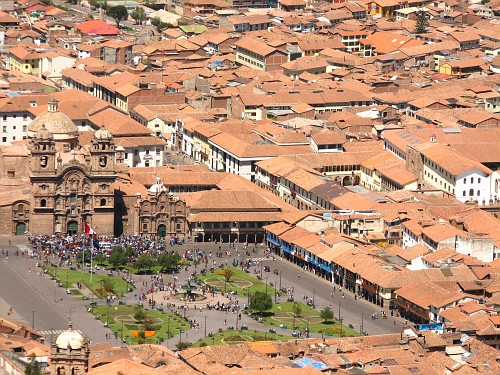 “Where are you from?”

It’s the same first question every shoe shining boy in the Plaza de Armas has been trained to ask.

“The heavens,” I reply in Spanish.

He shakes his head strongly in disagreement and, with confidence, states, “No, you’re not. You’re from the United States.”

Curiosity piqued by how he distinguished an American from the hordes of equally white German, French and Dutch visitors in Cusco, I challenge, “How do you know that?”

He doesn’t even glance down at the evidence, but holds my gaze steady and references, “From the brand of your sandals.”

I laugh out loud, as Chacos, indeed, are predominately worn by persons, and of a company, North American.

He continues, “The capital of United States is Washington, DC. President Clinton had a dog named Buddy and a girlfriend name Monica. Now there is President Bush. He has a dog named Barney.”

I had this same conversation, regarding presidential pets, in this same plaza in Peru, eight years ago. And I’m caught off balance for only a second, startled by the circles life has a fondness for spinning us in. Peru was my first backpacking adventure abroad, and now, some 40-something traversed countries and six years later, I marvel at how many times I orbited the Earth in order to find myself on the exact same bench where I opened up the first of (what would become) a bookcase of travel journals and scribbled the opening chapter chronicling the turning of an insider, out.

I presume that the point of these little life pirouettes, is to 1. realize that no matter how fast or far we spin, we end up in the same spot and 2. recognize, if lucky, either in our environment or selves, some change.

Well, today, the stars have aligned in my favor because I sigh in relief of the observation that although my bench has proven itself quite static, for all the rotations around the sun, neither Cusco nor I remain the same. Cusco is brighter, cleaner, prettier and while I can’t claim the same, I will give myself credit for a, since, acquired proficiency in Spanish and the six years of experience that age and separate me from my first memory of this bench.

I note an example of this difference when a boy selling postcards approaches me. Eight years ago, this same encounter ended abruptly with a wagging finger. This time I ask the boy where he’s from, what he does in school, and who painted the picture on the postcard. He takes a seat on the bench next to me and explains: He goes to school in the mornings and takes painting classes in the afternoons. He shows me, in order of difficulty, the layers of watercolor that he himself has impressed upon the paper. He explains that the lama faces are the most challenging of strokes and he shows me the places where his teacher assisted by using her own brush, and then proudly indicates to his own signature and name on the bottom of the card. Eight years ago, I relented to persistency and bought the postcard to keep the picture captured on its front. Today, I buy the card to capture the memory of the conversation and pat the pride of accomplishment displayed upon the boy’s face.

Perhaps I am a petty travel snob, but I hate being grouped as a “tourist” and love to think that if I can only penetrate those shallow layers of first impressions and interactions, then even in this district that reportedly relies on tourism for over 60% of its income and employment, I will be able to find unique and authentic exchanges with the people and country of Peru.

That is my question, goal and hope.

The reason I have come to Peru is to participate in a community service project in a tiny and remote village called, Quelqanqa that is hidden, without road access, within the glaciated peaks of the Urubamba mountain range. I hope this mission will provide me a path that will penetrate through Peru’s sun and time-toughened skin. I have only two weeks, so I don’t have any expectations of reaching the heart of a country that through years of strife, struggle, myth and mystery is most certainly escondido (hidden) to even those who are born within its borders. No. If anything, my global travels have only convinced and resigned me to the eternity of being an outsider. The heart I dare not hope to touch. But just under the skin. That’s my modest aspiration.

In my pre-trip online investigation of the area, I have learned a Quechua word and principle of Andean life: yachcay. It means, “to learn, to know and to remember” with the understanding that all true knowledge comes from direct personal experience guided by insight and intuition. Perhaps it’s a easy mission. Perhaps it’s intricate. Sitting on this bench in the Plaza de Armas, surrounded by tourist busses, trinket hawkers and a hundred different lines each rehearsed a thousand times, it does not seem a simple task.

And so with an appropriate challenge of yachcay, I venture forth…