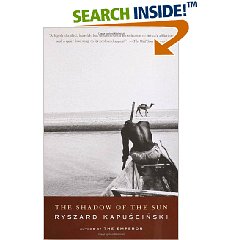 I’ll be back with another (final?) chapter on my bush taxi trip in Senegal soon, but if you’re eager to move forward with another story of African adventure, the following have each filled my free time and provided feast (but certainly not peace) for mind:

From Publishers Weekly
Colorful writing and a deep intelligence highlight these essays’ graceful exploration of postcolonial Africa. A Polish journalist who has written about the continent for more than three decades, Kapuscinski provides glimpses into African life far beyond what has been covered in headlines or in most previous books on the subject. 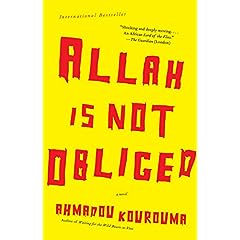 From Publishers Weekly
Starred Review. The late Ivory Coast author and political activist Kourouma (Waiting for the Wild Beasts to Vote) writes with a brutal and obscene frankness reminiscent of Celine in this powerfully tragic novel about a West African child soldier who learns early that “Allah is not obliged to be fair about all the things he does here on earth.” Unsure if he’s 10 or 12 years old, “rude as a goat’s beard” Birahima, a third-grade dropout, recalls how his once-beautiful mother became an amputee who “moved on her arse like a caterpillar” and that he suspected her of being a soul-devouring sorceress. After her death, the boy is entrusted to a roguish shaman and sent to live with an aunt in Liberia. En route, they fall into the clutches of a warlord, and Birahima joins their forces as a boy soldier, witnessing and participating in all manner of savagery.

Book Description (From Amazon)
In 1947-48 the workers on the Dakar-Niger railway came out on strike. Sembene Ousmane, in this vivid, timeless novel, evinces all the color, passion, and tragedy of those formative years in the history of West Africa.

The story of Shiva Naipaul’s remarkable journey through Africa.