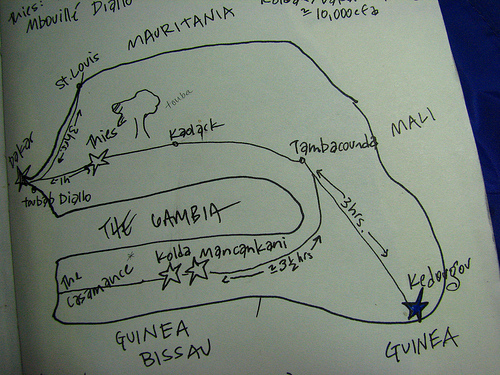 if it be the will

“Just pulled into Tamba. Don’t worry about me okay?”

I type in and send the text message to Mbouille on the cell phone that he insisted I buy. By now I know the phone isn’t actually necessary for my safety as much as it is for his emotional ease with my absence. But it has come in handy and I find it childishly fun to be so fussed over by such an unfuss-ing man.

My phone immediately vibrates back with a return text: “Sister! I’ve been waiting all day to hear from you! Late afternoon and only in Tamba? I will try not to worry. Please be careful. I hope you arrive before nightfall. Inchallah.”

*****
Wikipedia: Insha’Allah
Muslim scholar Ibn Abbas stated that it is in fact obligatory for a Muslim to say Insha’Allah when referring to something he or she intends to do in the future. If carelessness leads to the omission of the phrase, it may be said at a later time upon the realization of the omission.

The Spanish word ojalá and the Portuguese word oxalá (I hope, I wish) are derived from law šaʾ allāh, a similar phrase meaning “if God willed it” or “if God wished it”. In šaʾ Allāh is used for the execution of real actions (I’m going to the store if God wills it), law šaʾ allāh is used to express a wish or desire one cannot fulfill (If God wished [Ojalá] that I could go to the store, but I’m busy).
*****

Insha’Alla. As God wills it.

From my experience in Senegal, I’ve learned there to be an “inchallah” for every sentence: pre-emptive inchallahs, closing inchallahs, mid-sentence-pause inchallahs, and especially the stand alone, full stop, inchallah. In all its forms and spellings, I love this little word for its ambiguous but enormous presence.

I do think every sentence could stand for a little prayer thrown into the beginning, middle or end. And I wonder how English would fair with such a constant little reminder of its smallness, its interdependence, its….but I have to stop in the middle of that thought because it’s just too comical to consider. English with its arrogant pride, its overbearing sound undisturbed even by itself, its clumsy neglect of finesse; when it stands next to other languages it is THE EQUIVALENT OF TYPING ALL IN CAPS. No, there is no place for something so humble or sacred or respectful or softly recognizing of anything less than scientifically proven, in the English sentence. Poor English. I pet its ruffled fur.

There is a mantra (of which I’ve written before) that I stole from a Buddhist meditation retreat and toss regularly into my own sentence salads: the Sanskrit word, “Anicha.”

Which now that I rub my chin and squint my eyes until it blurs….

… might very well be birthed by exact same source.

Anicha. As it is.

Ahhh. I laugh out loud. Because chasing my tail is fun. For doesn’t it always come in circles and from the same? And I’m not the only one laughing, for while it is fun catching myself at my own tail, it’s just as much fun to catch someone else at theirs. And I always hear someone laughing with me at these moments.

So I have strayed far from my story. Let me return so that I may move just a little closer (at 40 miles per hour) towards the conclusion of this tale. Inchallah.

So I am striding gallantly, a little like the English language, through the bus station which doubles as a community market. Again, I am a glowing ball of whiteness to whom every person raises a hand and shades his or her eyes while staring curiously. The fact that I am white, and alone, overshadows even the fact that I am female. I resign. I don’t exactly know to or of what I resign. But there is a relief in letting go of whatever it was I was holding on to. Fear? Insecurity? Maybe it’s like getting onto a stage, naked, with a red feathered hat, and a painted mustache. Everyone is staring or laughing or horrified or whatever. And after this initial reaction, what’s left to matter? So what can I do but stride confidently?

So I stride. Through the market. Picking up a few bananas. Two scoops of peanuts signaled with two fingers to a young woman who is scared that I’ve chosen her but happy for the coins. A bottle of water from a vendor. A look into the kitchen of a wooden food stand. At painted walls and advertisements. I stride like through a dream. And finally ask someone where I can find the shared taxi to Kedougou.

When I arrive at the spot, clearly designated only by common local knowledge, I find the taxi driver leaning casually against the car. He pays me little mind. He waits for me to approach him, and expertly, he delivers me a price in a voice and tone that excludes all negotiation. Of course, one haggles for EVERYTHING in Senegal. But this man is clearly a specialist in swindling those who don’t know better. Looking over his shoulder, he blows off my return haggle with a sweep of his hand that removes a spot of dust on his shirtsleeve.

I complain, “is this the price for white people?” But he hasn’t time for my crap. Without emotion or interest, he flips open a small booklet and shows me the ticket underneath the one he is offering me and looks me in the eye for only the second it takes to say, “Look. See. Same price the last person paid.” And then he closes his little ticket book and squints his eyes into the distance for something more interesting than me.

He will wait for me, and he knows that eventually I will come around. And I know this as well. Because what we both know, is that he is driving the very LAST taxi departing today for Kedougou.

flirting with the other side

Having paid a shamefully full fare, I crawl into the backseat of the taxi and stretch my legs longwise, prop myself on an elbow, and start to read a book while awaiting the indeterminate arrival of the rest of the passengers. The trunk of the car is open and, as of yet, still empty of luggage, and so all those that pass by can easily see me inside. Word circulates that there is a toubab in town, and some gander over just to see it for themselves. Others stretch long arms through the back of the car offering teetering plates full of drinks in plastic bags, chunky necklaces made from coconut husks, homemade ice creams, piles of sliced watermelon, and bowl upon bowl of roasted peanuts.

A bit of a crowd gathers at the trunk of the taxi and I notice the driver taking a sudden and uncharacteristic interest in the events. He walks around to the back of the taxi and stations himself against a pillar to keep an eye on things.

Three young men, in a uniform dress of blue gowns and dreadlocks, duck their heads into the back of the cab with huge grinning faces. An innocent and youthful warmth fills the cab as they call me sister and ask me if perhaps I have any small change that I can spare in donation to their brotherhood. The boys, perhaps in their early 20’s, appear so authentically happy and carefree that I can’t help but enjoy their fresh presence. We banter back and forth for a bit, passing around introductions, sharing a laugh at my Wolof, and exchanging enthusiasm for a short break in the traditional roles we have been playing all day. In this welcomed pause in the asking of alms, we flirt innocently for a quarter hour before, to my amazement, I catch flashes of the taxi driver’s flushed face bobbing up and down and in between the unsuspecting three heads of smiles that crowd the back of the car. He pops his head up on the left and grimaces. Then he pops his head up on the right and shakes a puckered face back and forth. Then he pops up again, in the middle, this time looking directly at me, and shakes a dissenting finger back and forth.

What? Really? I wonder. Suddenly showing so much concern for the safety of she lower in priority than the dust on his shoulder? Ah. The bonding power of an external enemy. Fact or fantasy, this enemy, I recognize this tactic quickly for my president has employed this trick all too well by projecting the evil in his head onto a mysterious and ever-evading external element. (“The terrorist is in YOUR TINY, TINY LITTLE HEAD!” I want to shout; but now that would not be very mature of me, would it.)

Anyway, in THIS instance, I can’t help but laugh out loud at how swiftly the taxi driver has switched sides, and for some reason, I do take the slightest delight in the angst and defensiveness the cheerful boys have inspired. An idea crosses over the face of one of the boys as he dips into his pocket and dumps a small pile of shiny new Euros into my hand. He explains that passing Europeans have placed the coins on their alms plate, with which they can do nothing. This is too simple for me, because I can effortlessly make their day by simply exchanging the coins into local currency. I will be back in Europe in a just a few weeks, and while the coins are worth a coffee and croissant in France, they are easily the earnings of a few days work in Senegal. I do some quick math in my head, round up to the nearest CFA, and hand over the cash to the boys who are all the more joyous for the unexpected transaction. They shower me with prayers and I feel shy for the fact that I have done nothing. But they each shake my hand, wish blessings upon my head, and encourage me to make a visit to their sacred mosque.

After many hesitations, they finally leave, and a very angry taxi driver sticks a red-faced head into the car and with eyes that suspiciously swoop from left to right, tells me what terrible people they are to swindle me so. He saw the money I gave them and chastises me for being played for such a fool. I show him the Euros and explain to him the exchange. He narrows his eyes critically as he inspects the coins, but in the end, he is happier to just be mad and entitled; also a trick I have seen too many times before. He drops the money back into my hands with an uptight shrug.

I jingle the shiny coins in my hand, wonder where they’ve been, and love them for the secrets and stories they hold but will never tell. I know the coins are not fake. But I will not be able to prove that until I am later back in France sipping down an espresso with this especially sweet memory.

This story is as slow as the taxi ride itself, but we’re getting closer!