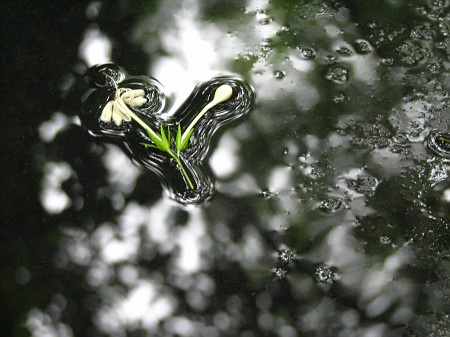 And every time I cocked my head, eyed the clearly barren sky behind me, and thinking I was stating the obvious, replied, “no.”

In fact I have not seen a single drop of rain for six weeks. Still chewing on the grit of Senegal’s sand and coughing on the fumes of Mumbai’s million motor rickshaws, a powerful thirst I have felt myself building for exactly such of cocktail of Earthly element. And so it is with hesitant optimism that I follow the eyes of the locals as they search the horizon while asking me these questions of the temperament and mood of the house and home (the North), from which emerges their revered monsoon. Shadows of history and habit must darken (only) their sky, for as I follow their narrowed eyes, I find that not a single cloud lends like credibility to the claim of daily rain. They tell me that Monsoon has yet to leave this Season’s house; that it stormed, in fact, just the day before. But as I look around for this phantom whose presence still clearly haunts, it seems I’ve arrived only in time to hear the echo of the Monsoon’s last knock on a now-closed door. Yet I do not doubt that I am, indeed, on the heel of the annual and auspicious guest, clearly evidenced by its footsteps freshly left: the dust is still matted and sticking softly to the ground, the palms and plants are hues of green made so only by months of overindulgent drinking, the driver – incredulous to clear skies – puts the roof on over our jeep, and we don’t see any animals in the wildlife park because there’s no need to visit the watering holes when faucets run freely from the trees.

But this week, for the first time in three months, I put my backpack down with the intention of staying more than three days in just one place. Noting the pause in my pilgrimage, the Tempest of intense, rugged and relentless experience that chased me over the Pyrenees, across Senegal, and down the Southern coast of India has taken this opportunity to make up lost ground in haste. As the sun goes down, my hair curls up, a clue as clear as any that the humidity of a storm’s wet breath is now breathing down my neck. Exhausted and thus unsuspecting and unguarded, I go to bed. But I am startled awake when Monsoon’s midnight footsteps approach my window and, at the same time, the reading lamp under whose light I fell asleep, with all the electricity, goes out. Blindly feeling my way out of bed, I approach the full-wall-window frame that holds not glass, but only a screen, between myself and a jungle of second-story limbs of trees. And here I search in the darkness for that which boldly stares back at me, while unseen clouds grumble angrily and the softly padded footsteps pick up deliberate speed. My heart races, not with fear, but only to match the anticipation of the whetted air. The Monsoon gasps, as it claims its long awaited prey, and at the same, I sigh, in willing surrender to this welcomed fate.

on the altar of the blessed and resounding,

Replenished and revitalized, I feel my way back to the bed. But the same rhythmic song that normally sings me to sleep, tonight, keeps me awake. Perhaps it’s the dark hidden eyes, still staring in my window and surrounding me, and the case of being “watched” that brings with it insomnia. Of unknown origin this energy that ties the sheets in knots around my tireless feet. So like I did the storm, I simply surrender to knowing that, this night, I will not sleep.

And that’s okay. The monsoons of rain and experience have, in perfect time, caught up to me. And there is no better place, than in this darkness, to begin the work of digging through and digesting what I’ve seen, done and been to reflect, relive and revise, the ever-evolving script of my life.