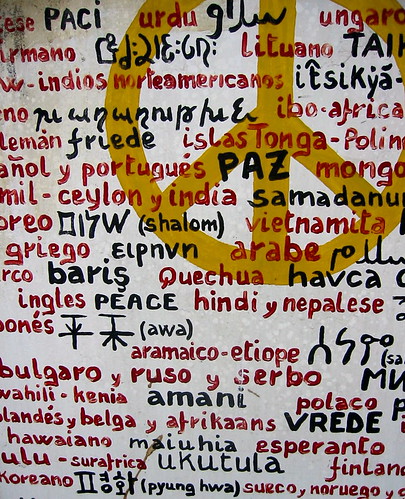 Well “crash for a few” turned into a 19 hour siesta. My head hit the pillow at 3:00 in the afternoon and my feet didn´t hit the floor again till 10:00 the next morning. I don´t think I´ve ever slept so much in my life. I walked in a daze for half the day, but am finally finding myself in a state of high alert tonight. And how could I not…amidst the pure power and passion of the tens of thousands of protesters who´ve closed down the streets of Madrid (including the one outside my hostel) waving banners, singing songs, painting windows, tagging monuments, and banging drums all to the pulse of “NO A LA GUERRA! NO A LA GUERRA!”.

I chant with them, sending my silent prayers of thanks that I am not recognized for the American I am. For I am certainly not oblivious to the thousands of signs that read, ¨Without the States, there is no war.”, “BAN BU$H”, “NO BLOOD FOR OIL AMERICA!”, “BUSH = HITLER”, “TERROR U$A.” And the countless banners depicting “peace doves” being shot down with missiles by “American eagles” and American flags with crossbones and blood dripping from them. And it certainly does not go without notice that the McDonalds and the KFC´s windows are spraypainted in large red and black letters with “BOYCOTT CAPITALIST AMERICA!” I´m so embarrassed, I have to fight off the tears.

And then I go back to my room, and I turn on the television, and I see the live cameras from Baghdad. And somewhere deep inside….I hear — I FEEL — the cries of innocent people dying. And I can´t fight the tears anymore. For to me, there is NO difference between the child that was killed in the daycare center at the bottom of one of the twin towers and the child that is dying — at this very moment — on the streets of Baghdad. Except for that the child in Bahgdad bears too much of a resemblance to the beautiful, but brusied and malnurished face of every child I met in the Dumpster of Guatemala City. And I can fight no longer.

into a patriotic fervor, for patriotism is indeed a double-edged sword. It

both emboldens the blood, just as it narrows the mind. And when the drums of

has closed, the leader will have no need in seizing the rights of the

citizenry. Rather, the citizenry, infused with fear and blinded by

patriotism, will offer up all of their rights unto the leader and gladly so.

How do I know? For this is what I have done. And I am Caesar.”