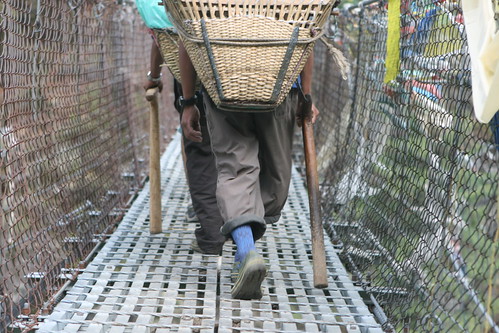 The Dolpo people (or “Dhol-wa” in their own language & “Dolpo-pa” in Tibetan) live in the Himalayan range of Dhaulagiri near the Tibetan border. The Dolpo-pa have a culture closely linked to Tibetan culture.

The lives of the Dolpo-pa were portrayed in the oscar-nominated film “Himalaya -l’enfance d’un chef”[1], in 1999.

Geography and history worked hard together to raise all possible barriers around the Inner Dolpo region of Nepal. The trek east towards the once prosperous Kali Gandaki road is always dangerous, never easy and seldom open; heading south means crashing against the Dhaulagiri; the high passes heading west just go to… Dolpo, and if one decides to head north he might be either shot by the Chinese guards or die of thirst in the endless Tibetan plains.

The inhabitants of the area belong exclusively to the Tibetan stock. Indeed the area was settled by Tibetan nomads in the early centuries A.D. and the links to the vast northern realm have always been strong, especially because Dolpo’s winter are so harsh that the herds must be carried north in winter if their owner wish them to survive.

In the golden ages of Lamaism Dolpo was administered by Tibet, Mustang (Lo) and Dolpo itself, and being a place ‘across no route from anywhere to anywhere else’, the area remained unbothered. The struggles between the more powerful chieftains controlling the surrounding trading routes hardly reached such a barren and godforsaken land. But such places are a magnet for hermits, pilgrims and would-be saints, of which Tibet was opulent. The area entered his ‘Renaissance’ between 1530 and 1700: scholars and famous lamas loved the place and founded small but famous monasteries like Shey, Samling, Margom and Yang-tsher, the locals were free and willing to engage trading expeditions north and south and were unmolested by administrators as long as they bartered donations for social control (read religion). This was the glorious period when the ‘Four Lamas of Dolpo’ lived, obviously ignorant of the fame they would have acquired four centuries afterward thanks to the passion of the British scholar David Snellgrove. Their names, Merit Intellect, Religious Protector, Glorious and Good and Glorious Intellect, are sufficient to create a magical atmosphere. It could not get much better than that, and indeed did not last long. In slow but nonetheless effective succession, secularization all around Tibet weakened both the quantity and the quality of the local Lamas; Mustang was conquered by Ghurkas, that in turn was soon absorbed by Nepal, the Britishs and so on, and basically everyone forgot about Dolpo; then the Chinese invaded Tibet and the border remained open just to small groups of adventurous herders and merchants, when even the important Gandaki valley closed. The population, where intermarriage was already ‘not infrequent’, remained more and more isolated, the authorities were non existent, the religious lamas lost the contact with their leaders and masters, and Nepal found it cheaper to declare the place ‘closed’ rather than helping it out.

If one is in favour of autarchy, he should visit Dolpo. With no material, spiritual and social exchange with the rest of the world, the only way is down. As a further disadvantage, the Dolpo society was not, and still isn’t, organized feudally around a master, or chief. The authority and social control functions are held by village elders whose ancestral authority is acknowledge by the community, and simple lamas. Being there no resources to plunder, Dolpo slowly fell into oblivion. Villages are small and far apart, isolated in deserted valleys, small bunches of stone houses with occasional wood-carved windows and flat roofs where juniper is left to dry, surrounded by barley and buckwheat fields and dry pastureland. Two months of greenery and flowers at the beginning of the monsoon season, fine months of ochre and five of white. Electricity is unknown, telephones a dream, plumbing non existent, metal almost revered, hospital unheard-of, schools absent, glass unfamiliar, medicines alien, gas outlandish. Energy comes either from dried yak dung or from occasional juniper. Young people can barely afford to sit still in winter and is forced away in small, shy trading ventures, where wool and barley is exchanged for whatever these cheap commodities can buy. Here the concept of per capita income is totally useless, because most of the economy is still based on simple barter. The poorest African village is more developed that any place in Dolpo.

A trek from Kathmandu to Dolpo is portrayed in the book “The Snow Leopard” by Peter Matthiessen.

“High Frontiers: Dolpo and the Changing World of Himalayan Pastoralists” by Ken Bauer was published by Columbia University Press in 2004.

(Uh. Whoa. Hadn’t read that till now. Guess it is a good thing that we’re bringing a few hundred extra pairs of shoes/socks and bags of extra medical supplies. So, hey, spin some physical/mental prayer wheels for our safe journey?!)