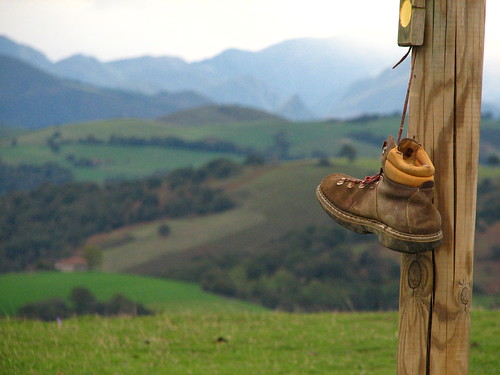 Journal Entry
Condom, France
(How unfortunate to have a contraceptive device named after your city!)
Mid-October

Four days ago, my brother (by blood) and my sister (by marriage) jumped off a two-car train and onto the tracks of my walking dream; hands shading the sun in scout for a sister they have heard much about but never actually seen beyond the borders of Oregon’s four corners.

I wish desperately now, that I had filmed that moment; that instant when, while their thoughts roamed only on the plains of my whereabouts, the bubble that I thought to contain my existence, despite the waking pinch, did NOT pop, and was gloriously realized, instead, to actually exist.

Suspiciously similar to the conversation had between self and subconscious the moment one becomes lucid in a sleeping dream, my mind chased its tail with the full-circle understanding; “You’re here. And I’m here. And we’re both here together. And everything else is still here….so this must be real!!!”

The only thing better than lucidly living a dream, is being able to witness with beloved company.

And for three full days, my brother and sister witnessed with me…

They met the magical cast of French cartoon-like characters, who swooped into scenes in full color with hearts equally overflowing in offers of unexplained generosity. They watched castle tops emerge without warning from behind hilltops covered in leaves caught between seasons of gold and green. They marveled at roses of every shades and all colors, that crept wildly over cobblestone on every street corner. They played twister with the language, laughed through game upon game of charades, and just shrugged or smiled at the beds of riddles left unmade. They too, were confused, by the red and white bars giving directions, that clearly take delight in dancing pilgrims off the route of their intention. They shared five-course meals with tables of fellow pilgrims, as listened to histories of enchanted towns, while locals’ cheeks turned rosy with wine. They dunked chocolate croissants into steamy mugs and spooned saucy crepes, while commenting on the absence of such luxuries in the States. They bedded down in lofty hill-top towns, in bedrooms with balconies that cast warm purple shadows over the lands just traversed. They picked plums and apples off passing orchard trees that reached out their branches and offered us Earth’s best-baked delicacies.

And when they left, a sensation that I rarely feel, completely overcame me.

Only a vague acquaintance of Loneliness, I took off my bag, sat down on it, and felt out the dimensions of this foreign emotion; its emptiness, its fullness, its presence, its absence.

Finally, I settled on the definition: “absence of presence.”

At this exact instant, two white butterflies in a tumultuous tango, mimicking (if not mocking), my own game of mental tag, swung a net and caught my attention.

As I followed their flight with my eyes, my horizons suddenly spread as I moved “out of my head” (a narrow space to live in really) and inhabited the 360° space around me instead. The sun of understanding rose as a second dawn set upon me, and at once everything awoke and started buzzing all around me. A million leaves began blowing, as the wind brushed my hair from my face, and into my ear, disclosed, at once its agreement and dissent:

“About Loneliness…” it said, “you are more right than you know.”

“For exactly as you’ve defined it — the absence of presence — it is only.”