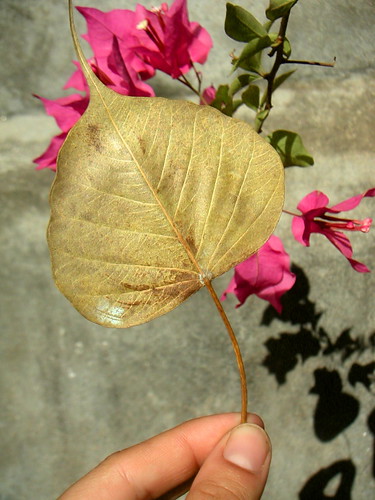 (Leaf from the Bodhi Tree under which the Buddha became enlightened.)

It’s been a year and a half since I started wearing the Buddhist Eternal Knot — a symbol for love without limits, compassion without constraints and the impermanent and cyclical nature of life and death. I sometimes take the symbol off its silver chain and trace its curves. And as I do so, I remember a day when I believed the world flat. When I thought the future was written in simple, short sentences. When I assumed that life ended in a single period mark. Full stop.

I’m not certain where I got the idea that life was a flat line. I’m sure at some point I asked, “Where do we come from? And where will I go when I die?” And I’m pretty sure I was told one or another version of a creation myth where everything was created in one miraculous moment from nothingness.

And I’m also sure I challenged this explanation. Because as I looked around my living playground through the tirelessly curious eyes of my 7-yr old self, I saw evidence of another story of creation…

I watched the fuzzy brown and black caterpillars disappear into dark homemade caves that appeared to house death, and miraculously reemerge transformed into entirely new flying forms of butterflies. I watched closely as the trees reached out their branches to sprout small buds that would roll out their tiny green leafy lives to embrace the light of the sun. I watched as these leaves grew with the grace of summer till they could take the heat no longer and turned color with contentment and finally danced to the ground. I watched the small brown seeds of old fruits from last season sprout from drops of hidden potential into vines that bloomed into the flowers and fruits of their secret inspirations in every color of the tasty rainbow.

Life spun around me. In small and big circles, and in wide and narrow intertwining hoops and loops, I watched the cycle of life and death weave itself together in an interdependent and endless knot.

I watched and I learned this; That life does not come from nothingness, nor does it pass away into nothingness. All life comes from another seed of life that was born in a phase of death. And Life does not pass TO death. It passes THROUGH death – on the path to a new form of life.

So why, I wonder, did it take me 25 years to finally re-realize what I already knew when I was 7?

And why did I spend so many of my “conscious and learning years” gravely grimacing at even the mere mention of the word, “reincarnation”? Since when did these ideas of life before life, and life after life, become inconceivable? And when did I start to deny my living experience and the millions of breathing, buzzing, and blooming examples of this cycle of life that permeate my physical existence? Who taught me that Death was the period mark at the end of my life line? And who said that Death was something to be sad about?

One day, when I was of an age I could still count on my fingers, I remember finding in the forest behind my house a fallen bird’s nest. In it were four tiny baby birds, all of which had also fallen from life. And I remember being fascinated with this passing. With no grown ups to tell me not to look or not to touch, I took my time at this place, touching and holding these small lifeless bodies with an honest interest in this subject for which the adults had only evading and squeamish solutions. And as I held death in the palm of my hand, I did not feel sadness. Nor did I feel mournful. Neither was I afraid. And when I look back at that experience, I begin to wonder if humans are deceivingly taught and teaching an unnecessary aversion to death. And I consider if in fact our natural reaction to Death, which we need only look to the 5-year olds to see, is really only of curiosity, peace and an inherent understanding that death is nothing but a natural part of the cycle of life.

And now I come back to that perhaps-not-so-very-foreign word, “reincarnation” which means nothing more than, “the reappearance of something in a new form.” Ironic, I think, that this simple idea challenges Western thinking almost as much as word that the world is round once challenged Europe.

Just as the world goes round, so does life. But understanding that Life exists before and after this life hardly means that all our sailing ships of thought are now going to fall off some indefinable cliff; Quite the opposite actually. The existence of realms of Life before and after THIS life means only that there are obvious and VAST waters yet completely un-chartered. And THIS, I admit, is a daunting idea.

To accept responsibility for not only one life, but for all lives. To reduce our current personal existence to its infinitely small place among a countless many. To recognize that all our material merits of today mean nothing in a timeless understanding of tomorrow and yesterday. And as if wondering what the purpose of THIS life weren’t enough, what if we really had to ponder what the purpose of all life, cumulatively, over millennia of existences, and particularly of humanity, was to be?

What if we really had to look up from our worldly diversions and face the destiny that the stars spread out in the Braille of our blindness across the sky each night?

Yes. Entirely new maps for living would have to be chartered. Definitely, a daunting task. Luckily, it seems Life has already planted her lessons in the gardens around and within us. And each seed of life carries all the secrets and mysteries of its, our, and all potential being. So that it doesn’t require books, or gurus, or Gods to worship to come to that wisdom. All that is needed is to remember our 5-year old fascination, curiosity and inherent understanding of the cycle of life.

(Did you know that in Hindi, the word for “tomorrow” is the same as the word for “yesterday”? And that there is a form of “I” regularly used that refers to the subject with perfect equality to all other beings, as viewed from an other outside observer?)