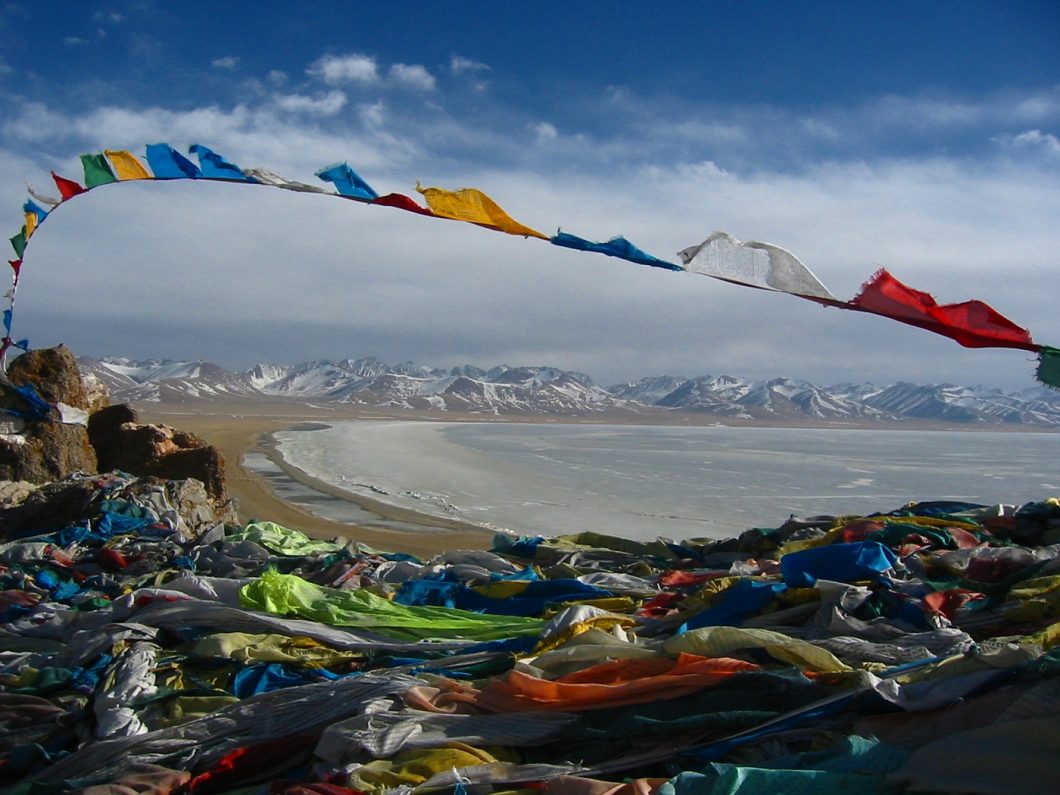 I’m in the mood for a story. And this one is particularly good, because it *literally* stomps on any pride I’ve ever held in assuming myself a culturally sensitive individual. But having recognized that my heaviest burden is ego itself, I’ve come to love my humbling moments, for it seems to be the stripping of pride itself that enlighten our lives the most. So without further disclaimer, let’s get back to laughing at myself…

And contrary to the progression of most good stories, the best line in this tale is actually the first, because it starts like this…

“So I’m walking a kora (pilgrimage circumambulating a sacred site) with a monk, a hermit and a 7-year old Tibetan nomad…”

(Do sentences ever slip out of your mouth that make you step out of your existence, scratch your ethereal chin, and wonder just who the hell you are and how you have become what you have? Well this is one of those sentences for me.)

So I’m walking a kora with a monk, a hermit and a 7-year old Tibetan nomad. Also with me are two of my Dragon’s students. The three of us set out to make a sacred turn along the shore of Lake Namtso, and we have quickly found ourselves in the colorful company of these vibrant characters. Language is certainly limited; the sum of the Tibetan words we know and the English words they know, barely surpass the number of toes and fingers within the group. But wide smiles and excited gestures of welcome speak loud enough to convey their enthusiasm for the union of our individual pilgrimages.

Pointing with a single finger, as it is in many eastern societies, is considered rude, and so our hosts, with open, sky-faced palms, gracefully spread an arm to one direction or another, sharing via animated gestures the legends behind each cave, rock formation, and stone indentation marked during the magical battles between their Buddhist and Bonpo heros as we continue our circumambulation of this sacred site together.

A sky-faced palm rests on a rock where many curious round marks are left. A charades-like battle is acted out, where Guru Rinpoche throws fireballs from the sky; the path of these projectiles terminating on this very rock. The monk, the hermit and the young nomad girl each approach the rock, bow their bodies, and touch their foreheads to the stone; a demonstration of their most sincere respect to this sacred spot. Then they turn and eagerly urge us on to do the same and we happily, and with like respect, mimic their motions.

We continue the circumambulation and approach a cave.

A sky-faced palm indicates to a spot in the rock, where indeed, there appear to be the impressions of two very human-like hands; another mark left during the making of this magical myth. The hermit shows us where to place our right hand, where to place our left, and where to touch our forehead to the rock. We follow their lead, and exuberance is the only adjective I can think to use to accurately describe our hosts’ wide-eyed delight in witnessing our mimicked example. Lake Namtso is, I remind myself, one of the holiest of pilgrimage sites for the Tibetans. It’s entirely possible, that by our actions, we are unknowingly rising ourselves out of a few of the of the Buddhist hell realms that we are currently living in; the excitement of our hosts matches nothing less than a feat of this magnitude.

A sky-faced palm motions to a hole further in the cave. Careful instructions are presented to us by example as the monk demonstrates the path that we must follow, through the hole, up over a kind of rock-bridge, and then dropping down back into the entrance. His smile pauses only for a minute when his eyes get very serious as he indicates to a specific rock along the bridge. His hands cross each other as he clearly emphasizes the importance of not touching that specific rock. By the look in his eyes, as well as those of the hermit and the nomad girl, it’s quite obvious that there might not be a point in living any longer if we touch that rock. The hermit and the nomad show us again, each in turn, the path. And as each of us follows, and appears again in the entrance, nothing less than the Tibetan equivalent of an American standing ovation applauds our great success.

I, however, am starting to seriously suffer from the effects of the 15,500 feet that separate us from sea level. As much as I am enjoying this incredible exhibition, my head is splitting from the lack of oxygen in the air, nausea is gurgling in my stomach, and the thought of presenting something as unsacred as the contents of my stomach anywhere near this special site, scares me into a subtle slinking away from the group.

I manage to clear about 15 feet before a 7-year-old hand fervently grabs mine. With no hesitation, the young nomad girl pulls on my arm with all her might, quite clearly communicating her desire to have me re-join the group. Despite the strength of her will, I have about 70 pounds on her, and I stand my ground. I let go of her hand and make the classic charade motions of stomach illness. I groan for added effect. I point to my tent and make the motion of sleep.

First she stomps her foot. And then she cries. Actually, she sobs. Tears are cascading down her sun-chapped cheeks, streaking the dust of her nomadic life, and revealing the rosiest color owned by all those living at extreme elevations of existence. She whimpers for her own added effect. And I give in. Her smile returns so quickly that I question if the little storm that just passed was just a well-rehearsed act. But there’s little time to contemplate the question as she pulls her prize back to the scene.

As we arrive, one of my students is just finishing the latest of tasks. He is carefully slipping his full upright body through a thin vertical crack in a rock strewn with colorful prayer flags. When he successfully emerges, there is another clap-less (but emotionally thick) applause and the crowd turns attention to me.

I visually take in the measurements of the crack in the rock and, quite confident that my small frame will have no trouble limbo-ing both walls, assure myself that this test will be easier than the rest. I disappear around the corner and squeeze myself into the entrance. I clear the first few steps and can see everyone on the other side; the hermit, the monk, and the nomad girl appear to be holding their breath. Since everyone is waiting with such great anticipation, (and I like to think due to my altitude-onset-delirium) for a little added effect I pretend to get stuck. As I feign my struggle, eyes get larger, breath continues to be held, and the monk’s knuckles turn white on the mala (rosary-like) beads of which he is gripping. Having properly built up to my big moment of success, I swiftly slip through the crack and land with full feet, ala Olympic gymnast, with jazz hands and a full-spread grin on the conveniently placed rock at the exit of the crack.

But my 10.0 landing is not received how I expected.

The hermit’s jaw has dropped and his mouth is framed by the perfect “O” of horror. The nomad girl’s face crinkles up in an expression of devastation most certainly and sincerely more authentic than her last act. And as the monk closes his eyes and grips on to his mala with noticeably horror-stricken hands, I imagine he is counting how many million mantras he will now have to chant to bring my soul back from the hell realms from which I’ve certainly plunged it.

My students’ response is a bit more practical…

“GET OFF THE SACRED ROCK!!!” they scream.

In my delirium, I am slow…

I jump off the sacred rock. A cumulative sigh is exhaled from our hosts, but the devastation they feel for the obvious and terrible end of my existence hangs thick in the air. They are still speechless. Thank the 9 Buddhist heavens that my students are quicker to the rescue…

“Hurry, hurry, go through it again!” they push me and my jeopardized soul that hangs in the bardo (Tibetan word for the world between worlds) around the corner. “And whatever you do, DO NOT touch the sacred rock!”

In clear understanding of my mission to save my life, I quickly slip into the crack, slither my way between both jagged sides, come to the exit, *oh so* delicately clear the sacred rock by healthy inches all around, and appear on the other side.

The breathing of the hermit, the monk and the nomad girl all becomes regular again and the creases of fear on their faces begin to melt. They are not quite ready to smile again, but I can feel them warming up to it.

The students and I wait.

And sure enough, I think they come to the unsaid conclusion, that being as ignorant as I am, perhaps the All That Is One will have enough compassion to spare my tiny, little, stupid soul. “Ah yes,” they begin to smile, laugh, and greet me as if I have just traversed many worlds to re-join them in this one of the living. They pat me on the arm and assure me that I’m going to be okay. After all, I have built up a fair bit of merit on this pilgrimage already, and countless sky-faced palms will continue to open themselves up to innumerable opportunities to gain additional karma, for many lives to come.

(And the story of my total humiliation was reenacted at campfire after campfire for the remainder of the trip.) The hermit doing another circumambulation around frozen Lake Namtso (Picture taken my by co-leader.)