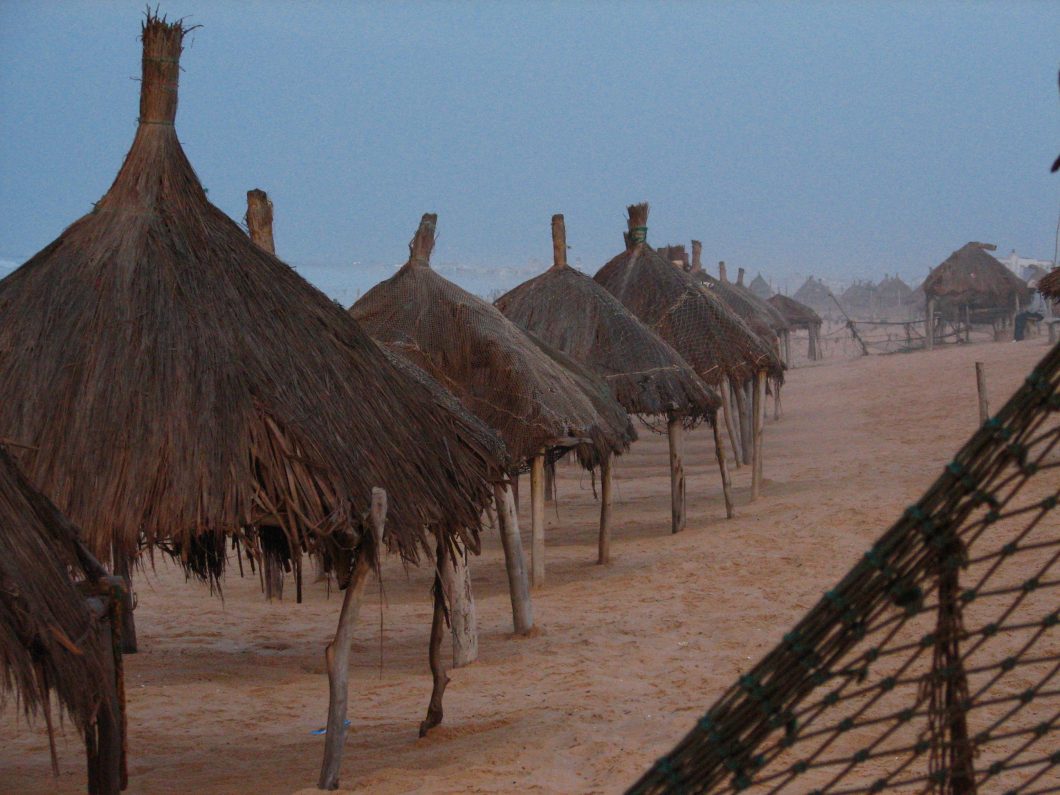 He isn’t actually going where we are going, but his destination is along the way and if we’ll chip in, he’ll pay a little extra and we’ll all (three hours since my arrival) finally be on our way. Agreed and extra small bills piled in the middle of the car, we all suck in our breath, pull up our knees and squeeze in.

We don’t go far at first. Just long enough for a flashing hole between my feet, where I can see the road pass underneath, to catch and hold my attention and make me ponder what is actually essential to making a car run. Whatever “it” is; it and only it, is here. The gray blur passing through the hole steadies itself on oily, black, concrete. Even I know better than to wonder why the driver is, only now, going to the gas station: he collects our pool of money and uses it to purchase the fuel needed for the trip.

A man with a briefcase is suddenly at the passenger window catching his breath from chasing after us. He’s speaking Wolof and so I can’t catch any decipherable gist of what he’s saying but can see that whatever it is, it’s making the newest arrival squirm in his seat next to me waving “move along gestures” and the rest of the men in the car look around at each other for someone to take the lead they want to follow but not initiate. Everyone stalls. Finally one speaks. The others all nod. The man next to me squirms and shakes his hand again. The man at the window pleads. The others nod again. The man next to me keeps shaking his hand and looking straight ahead. There is silence.

And this goes on for 30 minutes; plead, squirm, agree, shake, silence.

I get it. I don’t have to speak Wolof to comprehend that a full paying passenger has arrived who will return to the rest of the passengers in the car the cash we just chipped in.

At 9 am, four hours after my arrival at the taxi station, my new neighbor has tucked his briefcase between his knees and we all pull out of the gas station and hit the road.

“Hit the road,” while perhaps less an expression in this case, is an exceptionally accurate description of what I will do for the next 12 hours of this overland journey. Through that little hole in the bottom of the car, I watch hundreds of foot-deep crevasses, cracks and divots pass. The driver’s spine is erect in attention and his eyes are squinted and focused intently on the road. I can’t help but think of that game at Chucky Cheeses’ where you slam the padded hammer on the gofers as they emerge from holes and they pop up faster and faster, sometimes even two or three at a time. We swerve violently; left, right, sometimes backwards I feel. Often we bang, bump and sink and quickly I understand how anything unnecessary would quickly shake off the frame giving birth to many such holes as the one beneath my feet.

Although it is inevitable, for some reason I am surprised when an unseen signal calls for the car to halt and one of the men in the seat in front of me opens the door and runs into the bushes. He swaggers back slowly, with his eyes closed and clutching his stomach. He collapses back into the seat of the car for only a second before he leans out the door and vomits again.

The first time everyone in the car is sympathetic. The fourth time in half an hour, the driver is grinding his teeth and everyone is sighing with either annoyance or aggravation.

Sometimes when I’m in another country, thoughts don’t hit me as quickly as they should. Perhaps because I’m the one out of place and there’s already enough attention on me, I avoid calling for more. But it isn’t out of disrespect but out of neglect that I wait for the forth stop before I tap the leg of the man with the suitcase and say, “Attente! J’ai la médecine!” He yells up to the driver and repeats, “Wait! She has medicine!”

The sick man rolls his eyes toward me, but hasn’t any energy to respond. The driver turns off the engine, walks to the back of the car, opens the trunk and starts pulling out all the baggage until he finds mine. He shoves my backpack into my arms.

The whole car empties out and all eyes are on me as I desperately search for my little plastic bag of first aid supplies. After a futile five minutes of searching, I want to lynch myself for putting myself into the aggravated-sighing-spotlight when, yes! I find it! My foiled little package of tiny Dramamine pills that I regularly disperse to sick students when I’m working as a guide. I hand the silver package to the driver like a golden ticket. He could care less for anything except getting back on the road. He gives it a quick glance over, hands it back to me, and starts throwing everything back in the trunk.

The sick man is propping his cramped body on the back of the car. I punch out two pills for him and hand them over. He looks me in the eye for a long second. I have no idea what he’s thinking or deciding, but at the end of his thought, he tosses the little pills into his mouth, nods and gets back in the car.

I am left alone still holding the little bag. For the first time, I really look at it. In addition to motion sickness medications, it holds anti-malarias, different sets of antibiotics for giardia, amoebas, urinary tract, and broad gastrointestinal infections. It has antibiotic drops for eye infections and prescription creams for skin infections. It has disinfectants, tools for cleaning wounds and sterile bandages.

The little bag suddenly becomes very heavy as I realize that it holds the cure to the diseases that kill hundreds (or thousands?) of the inhabitants of this continent on a daily basis. The thought makes my stomach hurt.

The driver yells at me to get over my realization and back in the car and I snap back into action at his quick command.

The sick man quickly passes out against the window and after a half hour of relatively uninterrupted driving (for unfortunately there are no pills for potholes), everyone stops holding their breath and there is a collective sigh of relief. (The sick man won’t wake up till we arrive seven hours later.) People finally cozy down in their seats. The man with the briefcase asks me questions and offers me cookies. I pass around a bag of my own crackers as others laugh at my weak attempts at Wolof. I come to realize that our shared problem and my contribution towards solving it, has effectively broken down a social barrier that I hadn’t recognized earlier as erected. But I am thankful for finding my own seat suddenly a lot more comfortable.

(still to be continued)

Since you all know Mbouille now, if you’re interested in seeing a love note video that we sent from Boulder to Senegal last week, you can watch it here.