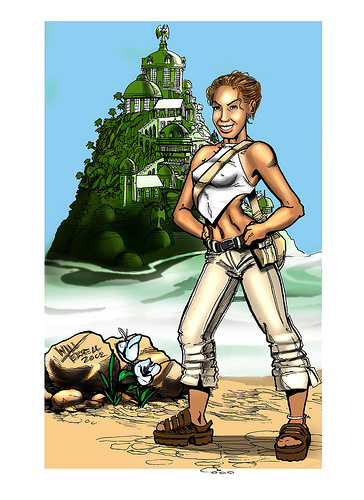 No peanuts are served on my flight from Paris to Dakar.

But as I pull down the seat tray and flip open (for the first time) my Lonely Planet Senegal, I learn that in addition to an average life expectancy of 56 years, and being 94% Islamic, one of Senegal’s principal exports, is, of course, the peanut.

Now, contrary to what many might embellish me to be, I am not fearless. Although some have so *kindly* depicted me as so, I am actually not a sculpted and belly-bearing, heroine who cuts through the unknown without hesitation, armed with nothing but a machete, digital camera, laptop and bottomless flask of courage.

Oh no, no. I have come to Senegal with a long list of phone numbers – belonging to friends-of-friends, both local and foreign – and addresses detailing directions to respective houses roofing couches I can crash. As well, I have had the entire country mapped out for me on bar napkins as co-workers and friends, who have spent months making cultural mistakes in the country while working for various NGOs, laid out for me straight, the rules of Senegalese social engagement. And despite all these briefings, in-country contacts and prearranged dates, on my red-eye to Dakar, I still drink two cups of coffee upon which I can conveniently blame my hands’ shake.

I’ve never actually looked into the matter, so I’m not even certain as to if hostels or other low-cost accommodation for travelers exists in the city of Dakar. I’ve only been advised that if I arrive in the night, it is not wise to be ambling about the streets seeking accommodation. Same for all cities. Luckily, one of the names scribbled into my journal has organized to have “his driver” pick me up at the airport. To those for whom the vision of the above “Rambette” sketch was shattered, let us also not swing the pendulum too quickly to that of high-maintenance, socialite-swinging, princess. For neither to this type of 1st class treatment have I ever been accustomed.

After clearing immigration, I enter a hall cluttered with taxi drivers and hotel attendants waving signs and am shocked to recognize my own name, typed in capital letters, within the clutter of ads and banners. I quickly seize the sign with embarrassment for the boldness such block letters command and, reveal, behind the sheet of paper, a man smiling wide with equally obvious intention.

He giggles. And sensing his amusement with my discomfort, I know the joke is on me.

We swap excited introductions, shake hands enthusiastically, and despite his attempts, I dance my backpack away from his grasps. He barely gets away with opening a door for me on way out to the airport parking lot.

It’s two in the morning and totally dark outside, which has the effect of turning our car conversation inward and keeps my first hour in Senegal comfortably confined to the small and cozy space inside the auto. My first challenge in the country is that the Parisian French I’ve been studying and speaking for the last two months falls flat in function as my ears strain to understand the new song of African French that he sings to me. Still, nothing is lost as all that goes over my head – in my inability to comprehend this new intonation – is replaced by the warmth and excitement of his animated welcome, which I will eventually recognize to be a defining characteristic of local greeting.

We chatter on until we reach a gate that quickly slides open upon expectation of our arrival. I step out of the car and shake hands and exchange introductions with a few security guards who, despite their disturbed slumber, are excited to meet the new houseguest.

The house is dark and its inhabitants asleep, so I’m quickly shown to the shower and my room. It’s a beautiful house full of verandas promising equally exclusive views; certainly far beyond the norm of Senegalese; owned and occupied by a small group of foreign journalists stationed in the country; one, among the few groups, who possess such means.

Knowing the tropics, and the insomnia such heat can arouse, I know the trick to solid rest is a very cold, pre-bed, shower. So I step into the tub and wash France off my skin. Despite a single shiver that a slight breeze through a small window shoots across my skin under the chilled water, as soon I step out of the shower, I begin to sweat, and feel Senegal begin to seep in.

Because there isn’t another more practical option, naked, I crawl within the mosquito net and tuck its four corners under my mattress. While normally I am the type to sleep as soon as my head hits the pillow, tonight I lie wide awake, listening to the curious anthem of a county’s creatures and critters to which I am foreign, and watching the night through the windows of my room, thinking only of the parallel to the obscurity, that is at once, both my reality and understanding of this country.