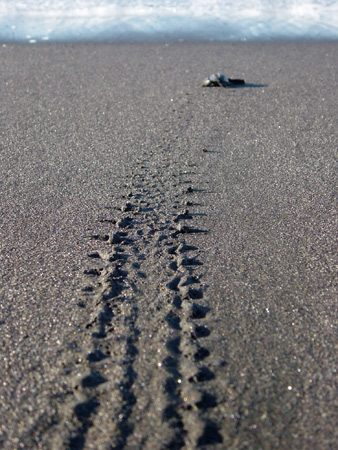 “Oh my gosh, this one’s so little!” I put the slide rule down and, with two careful fingers, lift the little creature up. His width, as measured exactly to be 2.0 centimeters, is small enough to make my eyes cross when I hold him up to my nose for closer examination.

His little eyes blink back at mine but, blinded by will power, he shows no fear. For with the clockwork and inexhaustible motion of a wind-up toy, this flawless miniature replica of an adult Olive Ridley turtle paddles with impressive and indiscriminate strength against sand or hand in search of the swim in the sea that he will spend the rest of his life in.

I look into the wire mesh enclosure that circles the sand where this nest hatches and a dozen tiny sea turtle heads poke their exhausted beaks from the sand. Despite that they appear to be identical hund-lets, here already the hatchlings begin to demonstrate their individual character as, upon the same first breath of fresh sea air, some collapse in relief and other are re-invigorated to a new full charge towards the sea. And both are quite validated responses, for after being abandoned by my mother, breaking out of my egg and spending the next 48 hours digging out of my own birth-grave, I too would fancy myself deserving of a break — either from work or for the water.

Although instinct (alone) has taught this hatchling the dangers of the swooping shadows of predators, the collective unconscious of this species has yet to imprint the intuitive instructions on how to swerve the myriad traps human beings have put in place to successfully impede the survival of these little life seedlings. The literal “dead ends” of the sea turtle’s life path are extensive, and almost exclusively the fault of fallout from (what I can only assume is) man’s suicide mission here on earth. Pesticides and heavy metals from the mass pollutants dumped in the sea cause a multitude of mutations and fatal diseases. Heavy ship traffic results in numerous propeller collisions. Shrimp trawling and fishing drift nets entangle and drown untold thousands of adult turtles. Trash, particularly plastic bags, are confused with jellyfish which are then eaten and cause suffocation. Nests are excavated at industrial levels with the eggs sold as purported aphrodisiacs throughout Latin America. Pregnant turtles are captured on their way to nest and are slaughtered for their meat, liver oils and/or shells which are used in making jewelry marketed to tourists. Artificial lighting caused by developments on beaches both dissuade mothers from nesting and disorientate hatchlings, leaving them lost so long that they die from dehydration in their unsuccessful quests to find the ocean.

I put the hatchling into the bucket and as he crawls upon the backs of his brothers and struggles so desperately to climb the impossibly slick walls, his frustration with this woman-made obstacle is obvious. But what the hatchling doesn’t know is that 45 days ago, a poacher followed his mother during her annual adventure from the sea, waited for her to give birth, stole her eggs from the nest, and saved his chance of survival. Yes, saved. For another fact unknown to this hatchling is that that thanks to our massive global pollution of the Earth and a phenomenon that men in suits to this day deny, the black sand beaches of Guatemala have warmed to temperatures that make the land nothing but an underground oven that bakes the nest at lethal temperatures and cooks each and every hatchling alive. The poacher that spared this hatchling only did so because he is mandated by Guatemalan law to donate a percentage of the eggs he collects to the local hatchery (the one I am volunteering at).

But the good fortune of this hatchling neither starts nor stops here. For his mother was the very lucky one in 5,000 of her species siblings to reach the age of sexual maturity that brought her back to nest on this beach. This beach, by the way, is the exact same beach that she herself was born on. Despite the fact that it’s been over a dozen years and thousands of annual miles migrating to far and foreign seas since she hatched and crawled across this sand to her first swim, she still knows her way back and returns to the very same beach that she herself was born on. This navigational marvel still humbles the best of human scientist: some say sea turtles travel in alignment to the stars, others hypothesize that they feel the subtle gravitation pulls of the moon, and still others theorize that they simply follow their noses recognizing the most delicate and directional smells of the sand that once housed the outer womb of their first home. In any case, it’s a mystery we do not, and most likely will never, solve. For every single type of sea turtle found in the ocean today is endangered. Leatherback turtles have been swimming in the Earth’s oceans for over 150 million years; they actually swam with the dinosaurs! Yet on my last night strolling the beach scouting for nesting females (while volunteering for the Leatherback Conservation Project in Costa Rica in 2003), I asked one of the long-term local workers if he thought the leatherbacks had any real chance of surviving the age of humanity and he replied, “if things continue the way they are now, there won’t be a single leatherback in the ocean in ten years.”

I turn my attention back to the next hatchling I pull out of the nest. I struggle to hold her still as she tirelessly does consecutive push-ups on my palm in her impressive attempt to paddle herself out of my hand.

When and by what hand was this adamant will to live wound, I, with admiration, wonder?!

I don’t know. But I pledge to her my support. The statistics are indeed dismal, but quite an equal match for the enormous will exhibited in my palm. And if she thinks she can do it, or even only asks for a chance, I will match her instinctual willpower with my intentional optimism.

Finally I manage to measure her weight, length and width…

She is the last turtle. I mark down her measurements, put her into the bucket and carry her out to the sea, whereupon I find a nice spot a few meters from the water line and delicately dump the pile of hatchlings out. I turn those upside-down right-side up and then quickly walk down into the water and turn my flashlight on to help guide their way, on this moonless night, towards (what would be) the natural light of the sea. The salty air and damp sand instantly invigorate even the sleepers and the race towards the water, towards a lifetime, towards opportunity, is on. Their hydrodynamic and streamlined flippers are hardly appropriate for land travel, but they make so light of the first of many disadvantages they will encounter in this life. They struggle forth making fast and outstanding gain towards the water and finally, the first far-reaching wave and fastest paddling hatchling collide. As she catches that wave and rides, I swear I hear her sigh. I watch her tumble with a wicked current into the adventure of her lifetime and realize that the shared sigh of longing and hope for life — was mine.

Feeling inspired to adopt a turtle nest of your own?

< Adopt a turtle nest at the ARCAS Hawaii Hatchery in Monterrico, Guatemala.
They do not yet have any way to receive online donations, so if you trust me (I do), I’m very happy to collect donations ($15 USD per nest) through paypal and will make sure the name and donation are handed over to my friends running the center in Guatemala. For a detailed explanation on what it means to, “Sponsor A Nest” at Parque Hawaii in Guatemala, go to: www.sponsoranest.com.

< Adopt a nest at the Clearwater Marine Aquarium in Florida

< Be a turtle benefactor at Cape Romain National Wildlife Refuge