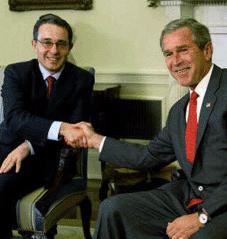 (My entire hostel in Cartegena was woken up and all the rooms were systematically searched on the morning of the weekend that Bush visited Uribe in Cartegena last month. Snipers patrolled the rooftops and police and military (readily equipped with riot gear) were also stationed in small groups on all four corners of every block. Persons carrying any sort of bag or backpack on the street were subject to any number of searches without explanation or question.)

My dinner conversation last night was centered around the comment and question;

“Interesting how easily and eagerly the US Government extended to us (Colombia), and even dipped into “emergency aid” funds to offer, an assistance package of 1.3 Billion dollars. Perhaps Asia would have gotten more than 15 million dollars in help if they´d asked for it in guns and helicopters instead of rice and water?”

In any case, I went online to think the question out (of US “aid” and intervention in Colombia) and decided to share what I spent my entire afternoon reading…

(I obviously do not support all the statements and opinions made in the following articles, but I did find them extremely interesting, and in alignment with I’ve personally seen in Colombia and heard from the Colombians I know.)

by Kristine A. Herwig

Colombia, which is roughly the size of Texas, New Mexico, and Oklahoma combined, supplies the U.S with as much as ninety percent of its cocaine and seventy percent of its heroin (Rosenberg 51). The U.S. has been involved in spraying herbicides on drug crops for nearly a decade in Colombia, but since 1995 production has doubled and a country known for its extreme violence and dismal human rights record has seen both escalate to even higher levels, implying that U.S. efforts thus far have had no success (Rohter). Because of this, in 1998 Colombian President Pastrana sought help from the Clinton administration to seek aid in reducing drug trafficking, negotiating peace with the guerrillas, and investing in development programs to wean peasants away from growing coca and heroin poppy (Bald). What was born in 2000, however, bore little resemblance to what Pastrana had originally proposed as Plan Colombia. The Clinton administration had given Plan Colombia a very different face that involved a military component of nearly $800 million dollars, 80% of the total 1.3 billion dollars being offered (Rosenberg 51). This military aid, however, may offer little chance of reducing the production of cocaine and heroin and is ?likely to make things worse ? to widen the war, handicap the peace talks between the government and the rebel groups, embolden the hard-liners and cause more civilian death? (Ibid.).

There is nothing particularly novel about the relation between atrocious human rights violations and US aid. On the contrary, it is a rather consistent correlation. The leading US academic specialist on human rights in Latin America, Lars Schoultz, found in a 1981 study that US aid “has tended to flow disproportionately to Latin American governments which torture their citizens,… to the hemisphere’s relatively egregious violators of fundamental human rights.” That includes military aid, is independent of need, and runs through the Carter period. In another academic study, Latin Americanist Martha Huggins reviewed data for Latin America suggesting that ?the more foreign police aid given [by the US], the more brutal and less democratic the police institutions and their governments become.? Economist Edward Herman found the same correlation between US military aid and state terror worldwide, but also carried out another study that gave a plausible explanation. US aid, he found, correlated closely with improvement in the climate for business operations, as one would expect. And in US dependencies it turns out with fair regularity, and for understandable reasons, that the climate for profitable investment and other business operations is improved by killing union activists, torture and murder of peasants, assassination of priests and human rights activists, and so on. There is, then, a secondary correlation between US aid and egregious human rights violations.

Why Say No to FTAA

For those Colombians who don’t want to deceive themselves, what the U.S. is seeking with ?free trade? has been explained with exceptional frankness by its strategists. Thus, according to Robert Zoellick, (U.S. Trade Representative in the negotiations), the “FTAA will help open Latin American and Caribbean markets to U.S. businesses and farmers by eliminating barriers to trade, investment, and services, and by reducing tariffs on U.S. exports which are much higher in these markets than those applied by the United States.? And the Secretary of State, Colin Powell, stated: ?Our objective with FTAA is to guarantee North American companies the control of a territory that goes from the Arctic Pole all the way to Antarctica, free access to the whole hemisphere without difficulties or obstacles for our products, services, technology, and capital.?

Thus, not unexpectedly, the decision to create the FTAA was made in 1994 by the only one in a position to make it, then President George H. Bush, a man loyal to a Henry Kissinger dictum that is truer in the Americas than anywhere else: ?Globalization is nothing but a euphemism for American domination.” And the Colombian government pledged to join such agreement without consulting Colombia’s people and without any analysis of its consequences.

(An interview with Doug Morris, Co-director of the David Anderson Center for Peace and Justice)

Put simply the U.S. wants a system dominated by elites who support U.S. wealth and power interests, so that U.S. businesses will be given free access to Colombian resources — material and human — particularly oil resources, but not limited to oil. Apparently Colombia has the largest oil reserves in the hemisphere.

There is a systematic history of the U.S. destroying independent alternative social movements when those movements represent the interests of the “wrong” people, namely, the poor, the peasants, indigenous people, working people, etc. It is the threat of “people taking matters into their own hands,” as Kennedy officials put it in discussing the real threat in Cuba. The point is the U.S. will not allow a successful alternative to develop and that is a real crime against all of humanity. This “monotheistic” approach, where “Profits over people” is the state religion which allows no alternative, is making conditions increasingly worse for people and the environment.

Given our enormous wealth and resources we should be funding experiments in alternative social, economic and political organization, not destroying them. This “monotheistic” approach, for most of the people of the world, is a grotesque catastrophe. Corporate rights should not come before human rights.

So, to sum up in answer to your question, the U.S. goal is to create conditions of “stability” in Colombia. Conditions are “stable” after people are forced, often through brutal repression and murder, to passively accept whatever the United States is imposing on them, in this case neo-liberal structural adjustment programs and austerity programs, often called the “Washington Consensus,” i.e. “good for corporations, bad for people,” which put corporate rights and profits above all else. Conditions are “unstable” when people are actively resisting U.S.-imposed programs. The FARC resistance movement are not angels, they kidnap, they “tax” businesses, including coca growers, they murder, though nowhere near the rate of the paramilitaries and military, but all of that must be seen in the context of Colombia’s real problems.