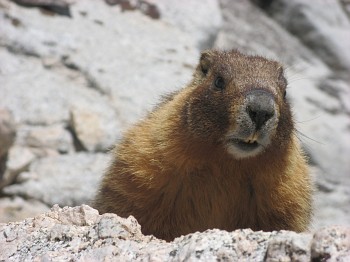 Obviously I have been busy.

Today I walked in the door from two weeks spent in the California Sierras conducting an orientation for our 20 summer abroad programs that just departed for different developing countries around the world. It was a blissful two weeks filled with some of my best friends in the world and if you’re interested in seeing a bit of it, I did pull out my camera on occasion: Dragon’s Summer Orientation 2007.

Today, also, my life takes on a new pace. It’s the first day that I get to begin to look forward instead of down at my immediate; I’m leaving for Peru in two weeks. And for India in two months. And for Africa in 5 months — so you can probably easily imagine the relief and excitement with which I jumped out of bed with this morning.

Having not written for weeks, I’m so excited to compose, but in the meantime just wanted to post a quick happy birthday note to my boss, to whom I am ever grateful for creating an organization within which my life passions and career can walk alongside each other, hand in hand…

I think everyone in this world has a dream – an inkling, a suspicion, a hint of hidden passion, an intuition – of something really great they could do with their life; of something that would be the catalyst not only for their individual evolution, but also a catalyst to ignite the catalysts of countless others towards a widespread movement and cumulative revelation.

Most people ignore this seed of personal potential: Bury it too deep in denial. Ignore it, giving precedence to matters of feigned importance. Maltreat it, in an effort to keep it contained. Plead ignorance for fear of its potential. Whatever the excuse, most people on this earth live with their true potential forever haunting their heart.

So I have to congratulate you. You are 40!

Now, I can see how such a number could inspire a little fear or regret for a person who has clocked those years into a machine, wasted them away on mindless activity, or spent them abiding the demanding voices that drowned the sound of those haunting his heart.

But for a man who has spent every day of his 40 years of life working tirelessly and passionately, despite betrayals, financial losses and at the expense of great personal sacrifices, all to care for the seed of a dream – well those years are only an amazing achievement! They are forty years of living in alliance with a mission that whispers, but speaks above all, intentions. I hope by now, that peace is creeping in. The peace of an un-haunted heart. The peace that settles in with the realization that you have made no exceptions, given into no excuses, put your complete faith in your dream, to live the only life you could have lived with no regrets and all honor.

And like every dream of right intention; yours is not only succeeding, but also setting fire to the hearts of all those touched by it. Like the best of dreams, yours is not only a goal, but a tool via which other dream seeds are dug, exposed, and held up before the noses of others who knew it was there, but couldn’t quite find or see it. Your dream teaches others how to care for theirs; how to find it, develop it, care for it, believe in it and take those first steps towards achieving it.

I’ve heard that our society is shit and, at the same, manure. And I think this is true. Perhaps our current condition is quite rotten – but at exactly the same time, it is also ripe for change and growth. And there are few people ready to accept the dirty work of tilling that land. But I do believe that’s exactly what you’ve jumped to the task of doing, and encouraged, by your example, an eager crew to do the same. Your faith is contagious. We see the dream, because it’s ours as well. But I can’t thank you enough for the dozens of years you’ve diligently put into prepping and preparing this adventure; directly facilitating the dream chasing of the dozens that work one-one-one with you, who then facilitate the same for the hundreds within their rein, and the thousands that those who have been touched, then, touch in turn.

If you haven’t already, I hope today, on you’re 40th birthday, you’ll – just for a minute – relax in the well-earned peace of an un-haunted heart, take pride in 40 years of a life fully lived, and throw your hands up in the air and feel the faith that has overwhelmed your life, being channeled through you to the (truly) countless numbers of those affected, moved, and inspired – by, within, and beyond – the seed of a dream that you fostered till it grew on its own.

Congratulations and thank you.

with love and admiration,