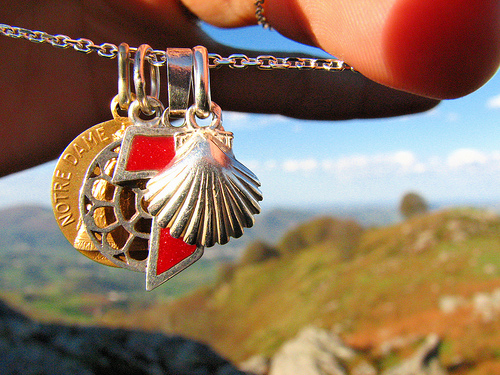 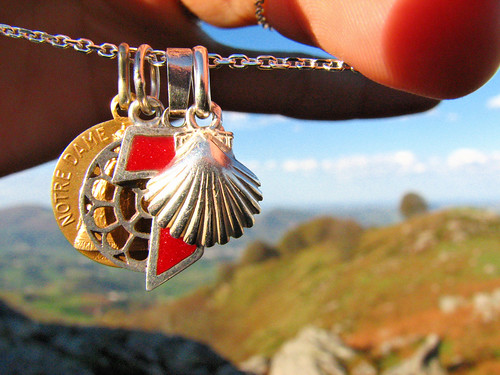 Popes, priests and prophets have their methods. Merchants, and those who buy from them, name it in terms of this or that currency. But the value and blessing upon any object, for me, cannot be determined by karat, weight, age, dollar or any element measure- or calculable. Additionally, I have a sneaking suspicion that we are only meant to keep the things we are gifted, and that we are meant to give away anything we personally purchase.

On my last day walking the Chemin de Compestella in Southern France, a mysterious man whispered into my ear tales, mirrored in the magic I’ve found along my own, of pilgrimage along the caminos and around the world. Before we separated, he left me a very powerful message; one too personally sacred for me yet to share. But to officially mark the occasion of transmission, he took the red Tao off the chain he wore around his neck, opened my hands, dropped it in mine, and cupped his hands around my own.

“No, no, no. I can’t. You received this in Santiago a year ago upon completion of one of your pilgrimages. I can’t take this from you.”

“Yes, yes, yes. I know what it means to you, and look…” He pulls up the sleeve of his shirt and showed me the goosebumps on his arm, “It’s right, you see.”

And it is wrong to deny any honest offering, as it’s a gift to the giver that one graciously receives. So I accept.

tal-is-man:?
noun, plural -mans.
1.a stone, ring, or other object, engraved with figures or characters supposed to possess occult powers and worn as an amulet or charm.
2.any amulet or charm.
3.anything whose presence exercises a remarkable or powerful influence on human feelings or actions.

Now I’m in the business of secret notes. I can’t get enough of them. I’ve left them tucked under tree trunks in Spain for friends, taped behind picture frames for myself in India, and hidden for a number of other lovers and friends in corners and pockets around the world. Additionally, I’ve collected a number of such from my best friends which remain unopened inside the zip-pockets of my Kangaroo shoes; I like to fancy that these secret love notes give me magic feet. And some day, perhaps on a sad day, or perhaps on a triumphant day, I will open them. (Many such days have passed, but the right day has yet to come.) But anticipation is sweet, especially when, daily, worn on one’s feet. 🙂

Quite natural was my evolution from secret notes to sacred talismans.

And that would all be the background behind the following, not-so-secret, note to my Parisian hostess and dear friend. In my departing-France haste, I was unable to edit and leave it under her pillow as I had originally intended. Not trusting of the Senegalese post system, instead I post it where I know she’ll eventually find it; here.

As all mountains do, the Pyrenees hold wisdom, secrets, mysteries and magic that match only their looming size. Perhaps their proximity allows them to catch runoff from the rainfall of understanding from the heavens. Perhaps from their studious observation of all below them, they have the concluding peace of seeing the cycle of life full circle. Perhaps in their silence, they have simply heard all. I will respectfully leave this mystery so. But albeit tight-lipped, the Pyrenees do not selfishly guard this knowledge, but whisper, sing and sometimes even shout to those who, with open eyes, ears and hearts, traverse its reign.

Before I set upon my pilgrimage across the Pyrenees, I found a small silver scalloped seashell. Virginous to experience, and the energy with thus consecrated, I set upon the small task of transforming, through alchemy, this simply metal symbol into a talisman. At the bottom of the mountains, I put my ego on the ground, raised my offering to the Pyrenees and asked for their assistance in this quest, to which they graciously agreed. And thus, backpack on, talisman initiates in hand, I ascended. And as I did so, with chain wrapped around my wrist, and initiates dangling and dancing between my finger tips, I reached out and at the same time, touched and asked for the blessing of the following…

And at the top of the rock, on a summit of the mountain, I sat down, closed my eyes, cupped this scallop shell in my hands and made a meditation: “Let this shell be (only) a symbol; a portal and channel, through which its bearer may tap the fountain of the Divine and all these healing, protecting, witnessing, loving and inspiring elements.” At this, my hands began to pulsate as they were intuitively inclined, to find and beat in rhythm with the heart of All, once again — with mine — aligned. And in answer to my humble request, I took the congruent beating of this gavel in my hand, within my chest, and upon Divine’s desk, as a motion signaling a silent, but resounding, “yes.”

Dear Friend. Thank you for being a special messenger along my path. I hold the mirror of inspiration and hope for many, as magical, to cross your own. Representing my wish for all the blessings that Divine’s instruments can kiss upon your head, you will find the silver scallop shell pinned, to the pillow on your bed. May it add to the magic, guidance, grace and protection of all Earth’s elements, on this pilgrimage through the last, from this life to the next…

So yes, Mom, and all other curious; I did successfully cross the mountains. The last four kilometers, (where I took a “wrong” path), were especially blissful as I walked through the forest’s full fall rainbow. There are new photos in the France album, but they are insulting impersonations of the reality I witnessed… And while at the top of the Pyrenees, the Wind was a might force to reckon with, on my way down, she only chased me playfully. Watch…

*sol bows her “namaste” and gratitude to World Nomads Travel Insurance, ThinkHost and Merc for their ever-supporting roles in the realization of her dream.