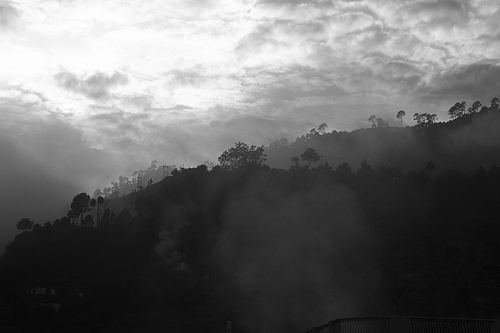 MY MEMORIES OF STAYS AT BORDER TOWNS ARE CONSISTENTLY DINGY. There seemed to more litter in the streets. And more stray dogs picking through it. The rooms were bare and broken, with cracks highlighted by inevitably faltering bulbs. The shadows in the streets seemed longer, and uninviting of evening adventures. The whispers, however, were the the most forbidding. In Guatemala, the restaurant owner would place a bland plate of food in front of me with a stern warning of the cartel activity in Mexico. In India, the hotel manager would inquire persistently as to why I would ever want to travel to the neighboring town in Nepal when the people were notoriously dangerous. Elevating the advice of locals higher than my guidebook, I’d hunker down in my room, reviewing maps, and questioning my route: What was I doing at this remote land crossing? Why would I ever leave the charms and comforts that I have discovered on this side of the border? In the morning, with a pack feeling heavier than normal, I’d trudge through the squinty-eyed border authorities in their menacing uniforms with weapons readily perched on walls or waists. And I’d exhale with relief when I made it to the other side, jumping on the first bus heading in any direction away from there. I’d watch the new imagery slide by under my reflection in the window, and feel the stirrings of something exhilarating, and building, in my chest. In whatever town I ultimately landed, I’d sit down to eat my first warm meal while a member of the house poured me tea commenting, “How did you ever survive India? The things I’ve heard….” and get my keys from a hotel attendant who would praise my decision to “get out of Guatemala and make it to the safety of Mexico…” And I would — finally — chuckle. Realizing that there is nothing dingier, or darker, than a neighboring unknown.

OVER THE COURSE OF THE LAST 21-MONTHS, I HAVE TRAVELLED ACROSS THREE COUNTRIES OF COLLAPSE: the death of my father and loss of two early second trimester pregnancies. If you accept the invitation to waltz with life, you accept the inevitability of obscured strangers on your dance card. Every date may ultimately be as dark, as handsome. And as the claws grew from the fingertips of my shrouded dance partners, tracking blue veins toward vitals, I out-of-body surrendered my crevassing heart. What was left, bled for months. What remained, were webbed scars in my eyes that I will never look in the mirror and not see.

In those dingy, broken border towns, I’d wake up before dawn, and organize my minimal belongings into a packing-order created out of habit: heavy, cold books at the bottom for weight-balance, crinkled maps and the warm, tough, leather of my journal slipped into the pockets within an arm’s reach. It was a task I could, and did sometimes, do by memorization in total darkness; the familiarity of blind touch bringing order to an otherwise directionless space.

What I didn’t know then, was that my travels would teach me how to move on. That sometimes in life, it would be only the ritual itself, of going through memorized motions, that would lead me, one foot in front of the other, out the door and across a border. Today, in the showing light of the other side, I’m surprised by the craggy scales revealed under a pushed-up sleeve: overlooked in, and earned by, those echoing midnight howls of grief. I see now that these newly taloned nails will be essential in the scramble across similar scarps of neighboring unknowns. And that every dusty step of this pilgrim path has leathered my life in preparation for the next.