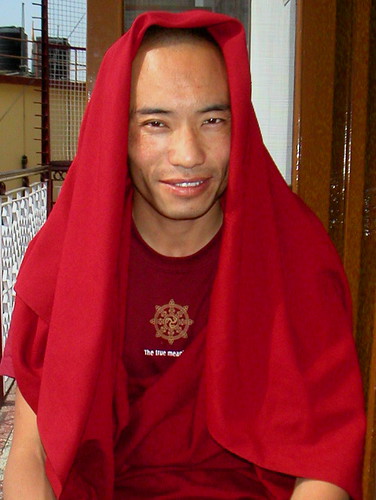 “Okay. Let’s move on to conversation. Tell me what you did this morning before coming here. Try to use complete sentences that are in the past tense.”

He puts down the book of the “4 Noble Truths” that he’s been reading aloud from and nods his head in agreement. He looks out over the balcony to find his words.

“What is the past tense of “to pray” Sonam?”

“Hum. Um. Prayed. Yes. This morning I prayed. And then I went to houses in the villages and prayed with families. And then I learned English.”

“Um. Yes. I STUDIED English. And I did my homework so that my nice and pretty teacher will be happy and so that I learn good English.”

I giggle and he immediately throws his robe over his head, which sends me crashing on yet another wave of verbalized delight.

He peeks out from under the robe to see if the coast is clear. But I’m still giggling and so an arm protrudes from the mass of maroon robes and he pokes me in the arm, “Why do you laugh at me? Please teacher, don’t laugh! You stop, will you! Please stop!”

(On the first day that I arrived in McLeod Ganj *home of the exiled Tibetan Government* I met Sonam on the street, a 33-year-old refugee Tibetan monk. We started talking and I offered to teach him English every day in exchange for tea.)

He throws the robe over his head again and a muffled voice from underneath escapes and begs for me to stop. Everything about this image brings me pure joy. It’s so hard to repress the delight his every gesture brings me. But with determination, I tuck my smile away, clear my throat of chuckles, and encourage him to come out of his robes…

“I’m sorry Sonam. Please come out. Come on. Now tell me in the past tense some things about your life in Tibet.”

One squinted eye appears and then he slowly emerges from the cloak.

“Um. Okay. In Tibet I lived in monastery. I became monk when I had 15 years. In Tibet, I never go to school. The Chinese do not let Tibetans go to school. Many Chinese in Tibet. They don’t let us do many things. Not allowed to put a picture of the Dalai Lama on my wall. Even if I not have picture of Dalai Lama, if they think you make prayers for Dalai Lama, you get beating. Many people beatings. Many, MANY people die. The Chinese break my monastery. So I escaped.”

“Yes. Three years ago. I leave my family. We walked for many weeks. Over the mountains. In beginning we had food. But not carry much. Could not carry much. And then we had no food. Sometimes we get one hand of rice. I eat rice…not cooked, just rice…I eat out of my hand and then I walk until I fall down. No energy. Many times could not walk. We sleep during day and walk at night so Chinese don’t see us. Many weeks walking. Very, very hard. All our shoes rip. We use rope to tie together. Yes. Very, very, hard. But Chinese not to find me. I escaped.”

He looks up from his shoes and says, “Teacher. You want to see homework? I wrote questions for you!”

He opens up his notebook and proudly pushes it over to me.

I read his questions aloud;

“What do people do in your country?”

“What will you do in your life?”

“Why people not have compassion?”

I look up at him and he smiles with a warmness that melts my very being.

“In May 1949, the newly established communist government of China decided to “liberate” the downtrodden Tibetan masses by taking over the country. The Chinese People’s Army marched into Lhasa beginning a brutal regime which has left over 1.2 million Tibetans dead and countless others imprisoned in forced-labor camps. Since 1949, some 90% of the nation’s religious institutions have been destroyed in the name of the Revolution and any pro-independence spark has been snuffed out.

Fearing for his life and those of his people, the spiritual leader of Tibet, His Holiness the 14th Dalai Lama, Tenzin Gyatso, walked over the Himalayas to take refuge in Dharmasala (below McLeod Ganj) India where the Tibetan Government was granted political asylum.

China, to this day, has resisted all attempts at dialogue over the Tibet issue. With Western nations relaxing their attitudes towards China, many now fear for the future of the Free Tibet Movement.” – Lonely Planet India