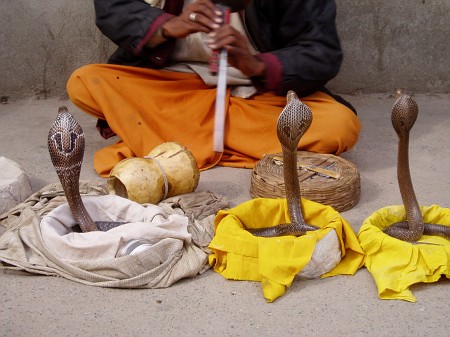 (My co-leader actually captured this awesome shot. And unfortunate for all involved, I forgot my camera re-charger in Lhasa, Tibet and my battery is now officially and completely cashed. But I’ve got a journal worth of words that I now have the time to post!)

I jump out of the car, insist that I’ll be safe on my own and Suren, my in-country co-leader and friend from Nepal, reluctantly gives me a final hug and jumps back into the jeep and leaves.

I turn around and, for the first time on the subcontinent, face India alone.

Froggerstyle, I hopscotch my way across the street: jumping in front of a decrepit bus with limbs hanging out the windows, sliding between two green, honking moto-rickshaws, patiently waiting for a man-drawn rickshaw to pass, and then making a final dash through the zigzagging taxis driven by swearing and fist-throwing chauffeurs.

The rickshaw wallahs (drivers) have seen that I have just arrived but, as soon as I hit the sidewalk, accost me anyway. I wave them off and find my way to the underground channel that will take me to the central train station. I enter the subway and am immediately HIT the scent of one of the world’s largest human populations, brewing and stewing in the heat of a boiling Calcutta soup.

There’s no shade in this city, but if there were, it’s be over 103 degrees sittin’ in it.

As I descend down the shallow steps (that couldn’t possibly have been devised with human feet in mind), an endless line of bag wallahs (men moving passenger luggage), slowly and strenuously make their way up. They wear blue and white checkered linen clothes wrapped expertly around their slim waists and red turban-like towels snaked around their heads for the purpose of padding the pounds of weight they support on top.

One of these men is holding up the flow of people filing up the right side of the stairs. I guess his age to be 60, although men of his caste and occupation, despite (or because of) the fact that they are constantly flexing their life-muscle, can not usually expect to live to an age that’s able to climb past this number. He might weigh a little over 100 pounds. The load on his head probably weighs 200. His whole body trembles as he defeats one more step, perhaps wondering with me, if it’ll be his final. His eyes ache. They plead for the mercy of relief. In slow motion I watch a bead of sweat, like a tear, roll desperately down his arm. And then someone’s hit Fast Forward and he’s gone — lost to my vision by the hoard of people that have impatiently overcome him.

Having spent the last three months continually on high alert of the eleven people of whom I was assigned the duty of protecting, I suddenly realize the sheer SELF-comfort that comes with being able to watch, care for and instinctively shelter another. For by doing so, we take cover ourselves. (Is this why we have children?) Now, naked of both distraction and duty, the rawness of life shouts out at me and expects an answer.

I am silent but observant as I step over the bodies strewn across the floor; naked men passed out and pushed to corners, skinny 14-year old boys sleeping in men’s trousers cinched together with string, mothers holding out their malnourished newborns begging for backsheesh (tip, change). Although it reminds me exactly of the place, this is NOT the Mother Teresa House for the Destitute. This is the Calcutta Train Terminal. And this – is India.

At the heart (and lungs) of the terminal, where the whole world seems to be either exiting or entering, I stand under an enormous billboard that, in red, flashes the numbers and platforms of the trains arriving and departing. I look up and wait to see mine. Not hundreds, but thousands of people file past me. I’ve never seen so many people in my life. Their mass is so thick that they do not see me until they are on top of me, whereupon they take one quick side step around me, and reconvene with their prior path. I look back up to the board and suddenly I am looking down; Down on this silly white girl, this odd looking and jutting pale-colored pebble in a dark river of rushing beings. “What you doing here?” I shout down, laugh at myself and wonder.

(I’ve been doing this a lot lately — stepping out of my eyes and taking a place in the audience, distantly and without personal attachment viewing my personal life-movie in the making. Perhaps, like many in the profession, the actor (that is my ego) has grown tired of its character casting and wants to know what it’s like to work in production, behind the scenes of consciousness…)

A university student in a crisp, white shirt and pressed slacks (always good for help in perfect English) looks at my ticket and gives it back to me. “Mam. You’re at the right platform. But you’re crazy not to have gotten a seat with A/C.”

When I arranged the ticket, based on everyones’ advice, I actually had requested an air-conditioned cabin. But the agent notified me that because of my late reservation, no such seats were available. The “Surrender to Life!” slogan that I constantly champion to students, friends and self suddenly raised a motion in my mind and, in accord, I slapped down my 800 Rupees ($18.95 USD) on the table and declared, “I don’t need A/C. Book it!”

Now, on the train, in temperatures that would melt metal, I look around and come to the realization that not just over-privileged Western women (me), but even your average Indian women are decided either too delicate, decent, or deserving to sleep (at least in this kind of heat) in any of the cars other than those reserved to the upper three air-conditioned classes. For there are NONE of them here; Women, that is.

What there ARE in this car is a whole lot of sweating and staring men. They are all wearing white tank tops and have changed into skirt-like sarongs to better breathe the heat. Complying with female clothing traditions in the East, I’m covered from top to toe in modest clothing, but even the skin showing on my neck feels exposed and indecent. I don’t feel particularly threatened or unsafe, but I do squirm under the relentless and unblinking gaze of the dozen men watching every move of the strange white woman who for some reason has been left here alone. (“Where is this woman’s husband, brother or otherwise male relation?!”) In India, it is quite untraditional for a woman to be travelling without the company of a male escort, and without one, she might even, herself, be identified as a, “female escort.” And judging by the fact that I haven’t seen a single other foreigner since I left my hostel, I’d say a westerner or white person, in general, is a pretty rare and stare-worthy sight. I don’t blame them and am not about to set out on a quest to impose Western courtesies on the Eastern world…

BUT when the Rail Official comes to collect tickets I politely and quietly ask him if, by any chance, there might be an open seat left in 3rd class AC.

His ears immediately perk and then, in a glance that judges the thickness of my moneybelt in accordance to the cost of my clothing and luggage, looks me into the eye (for the first time) and says with a hint of hinge, “Why, yes Mam. We just MIGHT have a seat for you in A/C. ”

Oh! How could I have forgotten! No matter the “no”, in this country, there is always, (always!), a baksheesh (tip/bribe) backdoor!

For this is India!