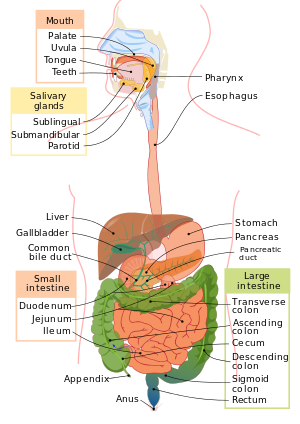 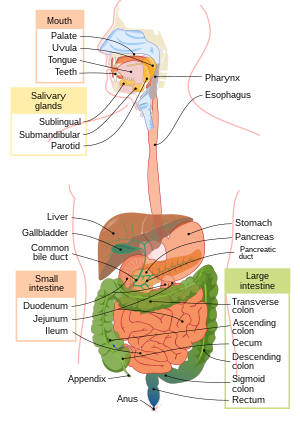 (My apologies; I’ve been on a bit of a road trip and typing is difficult from passenger seats. The following “continuation” is only another contraction but it IS also two terms closer to the final push of this, “detox dictionary”…)

Large intestine: The function of the large intestine is to maintain fluid balance of the body, absorb certain vitamins, process undigested material and store waste before it is eliminated. Where is it? Well, if you’re anything like I was before my detox, you’re probably looking down at your general belly region and thinking, “Well, I know it’s inside there somewhere…” Post-detox and post twice-daily intestinal self-massages, I now smack myself in the head in astonished embarrassment and wonder if anyone besides me finds it alarming that we modern human beings know so little of that which we consist? Personally, I know I’m more familiar with the insides of a vacuum cleaner than my gut and I would bet most men know the mechanics of their car far more intimately than their own body’s engine. Does this fact suddenly strike anyone as stupidly as it’s struck me? No use in beating ourselves up but we can press further. And I know there’s something terribly scary about feeling (literally) how human we are, but take your hand and, using moderate pressure and looking at the following diagram, start pressing around your abdomen. After you follow the path of your large intestine (the colon being the u-shaped portion), and since you’re in the neighborhood, find your small intestine (in the middle), stomach (above), liver (above as well) and kidneys (side & back) as well. Heck, just for kicks, put your hand over your chest and feel your heart beat. Yes. There is GOOD stuff in there. Shake hands with your insides; the friendship is long overdue.

Bentonite: The definition of Bentonite sounds like a riddle:

What clarifies wine, seals the disposal system of spent nuclear fuel, is used in making professional sand castles, clears the funk from cat litter, is used in drilling mud for oil, can be found in rocket nozzels, is an important ingredient of face masks used to eliminate acne, is the main active ingredient of man’s first industrial cleaning agent, lines landfills, forms from the weathering of volcanic ash, absorbs several times its dry mass in water and safely aids in the removal of long-lodged toxins from the human body?

Well I’ve already given away the answer. But the question, Alex, is:

Or at least that’s a selection of the list of attributes and uses of Bentonize stacked by Wikipedia.

Bentonite, perhaps more practically and from the perspective of a detox faster, is simply sludgy spoonfuls of gray clay. It’s pretty tasteless and easy to swallow except for a grittiness in texture that makes every slurper grimace. On this particular detox plan, we slam our bentonite with water, psyllium husk and a little fresh watermelon juice. Once you learn not to “chew” your bentonite “shake” (and thus avoiding the grit by avoiding the grind), the shakes are actually eagerly anticipated, and even — to a few of us — considered tasty. But we are fasting. So even dirt might taste good and being a form of volcanic ash, bentonite is, after all, a close cousin of earth. But in all likelihood, it’s probably less bentonite’s enchanting affect on our palette that gets us fasters excited for our fourth shake of the day and more the fact that the psyllium husk expands in our stomachs and extinguishes the squeezes, pangs, grumbles and all other evidence and feelings of hunger. The bentonite is also functionally appetizing in that it quickly works to absorb and eliminate the toxins broken down and released into the body during the process of fasting. Toxins, being rather nasty in nature as their name would imply, are responsible for the headaches, nausea, rashes, light-headedness, etc. that are typical of a long fast. All these uncomfortable side effects of detoxification get a free and rapid ride out of the body with the help of the bentonite. And thus the friendly combo of psyllium and bentonite gives us fasters something concrete (of which bentonite is ALSO an ingredient) to cheer our sludge shakes over.