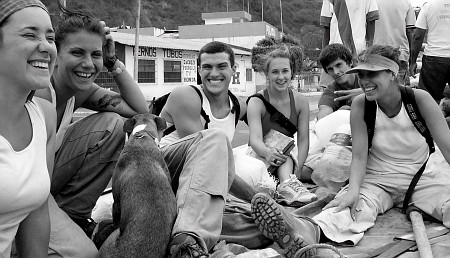 In 2004, I added an item to that list and, on the beach of Ecuador, I spent some time working toward the accomplishment of that task.

At the same time, on that same beach, I met two boys. And you should have seen their eyes light up when I handed them the toys and introduced them to “poi.”

A few weeks, and many sweet memories, later, we said goodbye. I went North. They went South. Over many continents those three paths crossed before they converged (as we knew full well they eventually would), coincidentally and conveniently, on Pearl Street in Boulder, Colorado.

The story quickly came to light that, over the beaches that sprawled between our joint trysts in time, the same task that had accumulated dust on my list, prioritized theirs, and I suddenly found myself in the presence of masters of the poi craft. Not only an expert of the skills, but also in teaching them, Zan patiently instructed me the on breakdown of the backwards weave and put a bucket of lamp oil in front of me…

It was (obviously) my first attempt at spinning fire and I, oh-so-strategically placed my (cropped, because it’s boring) video first, as the true potential of poi looks a lot more like this…

I have SO much to learn and the coin has flipped in my favor because this same good friend and patient poi-master has just finished completion of an instructional video. I’ve crossed an item off, but added another. And when I cross off that task, I’ll be sure to upload another video. 😉

’til then, I bow my admiration, appreciation, love and namaste to both of the Moore brothers…