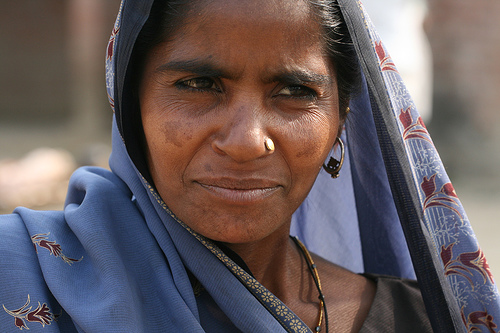 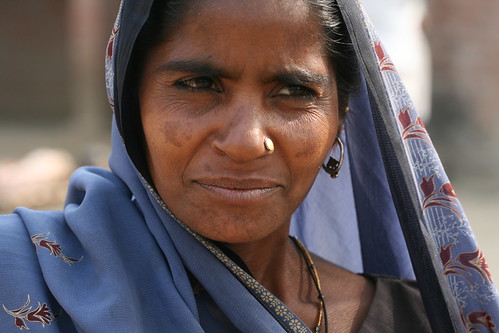 Village Faces, U.P. India, originally uploaded by seekingsol.
(This is an excerpt from a personal journal entry from the first week when I arrived in India. I sometimes cringe and curse at the weird way my sentences wrap around each other in odd-measured rhyme when I get writing. So know that it’s unintentional, but just the way my thoughts get scribbled. You see. A curse.)

india is an arranged marriage

There is no courtship with India. The face peering back at yours from behind the curtain does not bat her lashes or bite her lip. It is the lack of fear behind her stone stare that makes your heart race with unnamed emotion. The sterile passport-sized picture of her given to you does not invoke the vision of her as the mother of your dozen children. Yet your story with her seems dimensionless and pregnant with a million incarnations that could be conceived of the union. India is not coy. Nor is she shy. And you sense a thousand secrets, hidden millennia deep, when she finally chooses to give your gaze relief. India does not rank high by conventional standards and comparisons of beauty. But her features are sharp and distinguished and clues of a character that will not fade when fairness and years are incrementally dismissed. India does not flaunt, but neither does she hide. She does not rely on the skin she shows, but that which she doesn’t, to tantalize. India lowers her eyes. Not in feigned defeat, but in respect to that which she knows hides under the shadow of Earth’s own sari. India does not pretend — to know you, or that you know her. She knows that those worlds will take exponential lifetimes to explore. India hasn’t the time to, without prompt, monologue an explanation of herself to you. But she will reward each individual and invested question with her most straightforward and simple truth. For although India is a young bride, she feels no rush to attach herself to only one of her multiple lives. India dreams. And she trusts. She still calls it fate and questions those who say it’s not. India raises a candle to the sun. She feels no need to draw the theories when she can see the likeness clearly. India knows not what, but, that she doesn’t know. She doesn’t guess, but answers the biggest questions, honestly, with her silence. India knows she will grow old and, with time, wrinkle, but that is not how she remembers the line of women that came before her. She’s comfortable with her youth being shed and only hopes to inherit the pride of those whose footsteps left the path before her distinguished and well-tread. India trusts her ancestors. She counts on their mistakes to give merit to the wisdoms they pass along, even if the logical connection is ages lost or forgotten. India has great heart and hope. She sees no advantage in allowing herself to wander the fantasies of failure. India did not choose you. Neither did you choose her. Someone, something — above, older, wiser — of this proposal, was the organizer. And yet, the plank over this apparent divide, was the subconscious consent stated in the silence from both sides. One can insist on free will and draw a line. But, as India points out, fate can always draw another one, just an inch behind. Yes. India is wise. She’s an old wife, who has outlived her partner but lives on to share the recipes — for food, in love, of life — to any of those who bother to lean in and listen to the creaking treasure chest of her whisper. Perhaps you are circling India now, taking your wedding vows as she follows your steps around the sacred fire. You may not have ever seen her face, but you know she is there, a step behind you. Waiting for you to gather your courage, take her hand, lift her veil, and finally face her.