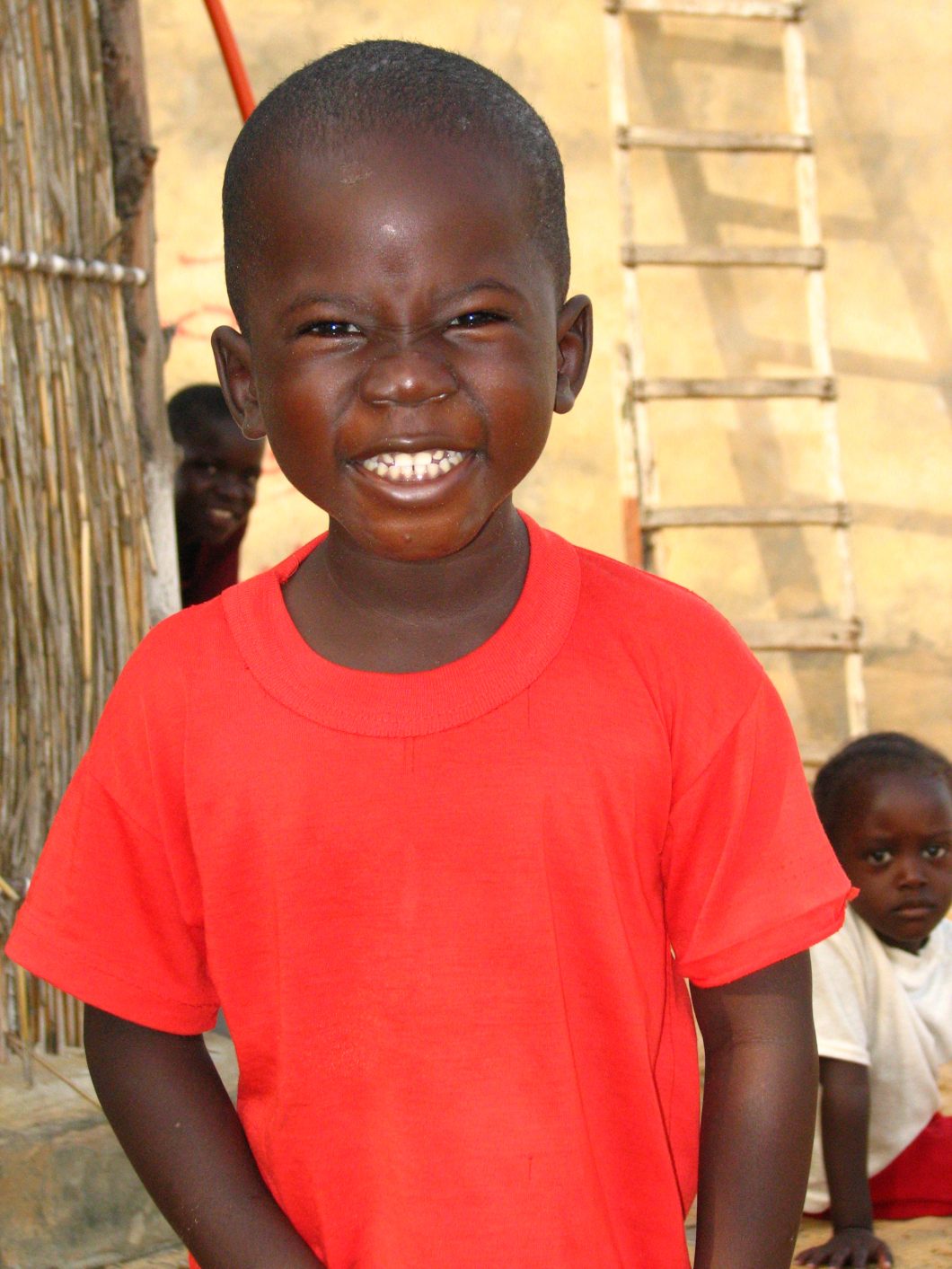 getting to the period

Africa is a guru, of whom any and every encounter provides another opportunity to master grace in the practice of patience.

And just as my lids close down and wipe clean the board of expectation with a limp rag of exhaust, our 5th, 6th and 7th passengers arrive simultaneously — confirming that lessons can’t be bothered with run-on endings; once they are got, they get to the period.

A hasty duo of a man with a young boy wearing a fresh cast on his arm take over the middle seat. A young girl squeezes into the seat next to me.

Four doors suddenly slam. An engine shakes awake. Bodies assort themselves into the first bearable arrangement of interlocking limbs. And we are on our way.

The girl sitting next to me is different. Is it her fashion jeans? The bottled water she sips on? Her quick and confident manner? That she’s traveling alone? Or her indifference to my presence? She finally takes note of me, casually offers me the bottle of water, and asks me if I’m a Peace Corp volunteer.

This, by the way, is the common assumption of any single traveler in Senegal. If fact, because Peace Corp volunteers do predominate the toubab population pie, they have created a rather unfair assumption and expectation that all foreigners in Senegal should speak Pulaar and/or Wolof (the local languages of the country). Quite contrary to the lovely, little, warm back packs I’ve received by locals for my petty attempts at Hindi, Nepali, Tibetan and Thai, the most common response to my greetings in Wolof has been:

“What? You speak terribly! That is pathetic. If you are in a place that speaks Wolof, you must speak Wolof! Your attempts at our language are a shame.”

No harm is meant by the bite in this criticism. Like Africa, Africans like to get to the point and, unlike Americans, feel no need to cushion criticism inside a sandwich of fluffy white-lie compliments. I can respect that. Besides, my Wolof, frankly, IS a shame.

But I’m not speaking Wolof with the girl; we’re chatting in French. And her clear pronunciation and patience confirm my suspicion; she deals regularly with the toubab population and is quite accustomed, perhaps even to the point of boredom, with the presence and manners of foreigners. It turns out that she manages one of the small guest houses that accommodate those travelers venturing inland and into “the bush” for a little more colorful experience than that provided by the white sandy beach resorts of Senegal’s coastline.

I’m not a Peace Corp volunteer, but I do work for an organization that brings students from the States to Senegal, and, oh yes, she knows my company because her little brother was adopted by our group when they came through last summer, and what a small country and community this is, because, look, I have his (her brother’s name) written right here on my notepad of people I’m supposed to seek and meet!

Small indeed. But let’s get straight to the period on a case demonstrating, perfectly, the simultaneous small, big, and all-around-ness of African community.

We actually don’t have to even get out of the car, because it IS the next stop on this taxi ride, and stopping is where this chapter starts…

Please, try with me, to follow this next sequence of events:

The taxi pulls over. The man with the boy with the broken arm gets out. They get their bags out of the trunk. Someone approaches and talks with the man. He looks frightened. He wants to get back in the car. He puts the boy in the car. The boy starts to cry. The two men start to fight. The taxi driver starts to get impatient. He gets into the driver seat and makes to leave. The man jumps into the car and shuts the door. We drive a few blocks. A woman runs into the road screaming. The taxi stops. The screaming woman is followed by two more women. One is crying. The other is holding the crying woman’s arm in support. More people follow the women. The father of the boy with the broken arm averts eye and generally appears to be at fault for something very bad. The screaming woman is yelling at him. The crying woman cries louder. The boy begins to wail. One of the women in the crowd opens the door and starts to pull on the arm of the boy. He shakes his head and screams. The dad gets out of the car. The crying woman lunges at him. She stops crying and starts screaming. Neighbors pour out of the houses and encircle the taxi. The dad starts to scream back. The boy wails.

The mad woman. The people behind her. The passengers from the taxi. The father of the boy. The neighbors. Everyone is throwing around animated gestures heavy with accusation. The taxi driver thumps his head against the roof of the taxi and throws desperate motions back. Suddenly a man, whose presence commands attention, parts the circle. He stands in the middle, between the screaming dad and woman. He talks to one. Then the other. Both scream out their cases. The mediator eventually turns to the man and with a calm hand chops out a declaration with which the father of the boy is clearly unhappy. Fifty minutes have passed and the taxi driver is livid. A few kids from the village point at me and sing out, “toubab! toubab!” I ask the girl what’s going on, but my French is simply not good enough to make sense of the story. I ask her to repeat the story. But still follow nothing. So I pretend to understand and she tells me that she’s going for a walk and starts to stroll down the street. The big mediator man talks to the taxi diver, talks to the screaming women, talks to the dad. And then the Dad and the crying/screaming woman get into the car. The boy wails. The taxi driver slams all the doors. We part the waves of what must be the entire town, and drive down the street. We stop at a house. We pick up the girl who was sitting next to me. The man and the woman get out. They come back after 15 minutes. We all squeeze in. And the frothing and fuming taxi driver slams his foot on the gas.

We do not drive. We FLY. Wheels spend most their time suspended by the strings of fast turns and risky overtakes. Not a single word is spoken as the anger of the taxi driver fills every inch of space not taken up by body.

I’m alert. And quite scared for my life by the speed and jolty punches that the driver is throwing at the road in absence of a human recipient. There is something about his driving that feels…. entitled. Yes. Entitled and excited. Like this is the way he has always wanted to drive and isn’t it nice to be entitled to a little madness in life every once in awhile? I think about the doors I’ve slammed in my life, and wonder what it is about total loss of control that makes the swing and sound of a slamming door feel so strongly satisfying. Yes. Mad feels good.

After forty minutes of daredevil passing and drag racing, we screech to a whip-lashing stop. The mad taxi driver slams open the door (which I think is possible), slams it shut, slams open the trunk, slams luggage onto the ground, slams the trunk shut, and slams himself back into the driver seat of the car.

Even the crying/screaming woman recognizes that the driver’s anger-entitlement trumps her own and not a squeak escapes her as the three slip their way out of the taxi. The boy’s cast arm has barely cleared the door when the taxi peels off the side of the road living the family in the dust of the taxi’s final sigh of anger and disgust.

So it took me two weeks to figure out what happened that night. And not because I finally logically put together the clues and puzzle pieces, but because, to my incredible luck, a half a moon later, I just happened to find myself in the company of a friend fluent in French AND the girl that sat next to me in that car that day. And yes. The circles in Africa are just that small.

Now proceed with caution. And if you find that the answer is as confusing as the question, we share a boat. Also, I might have gotten some of the facts in this story wrong, but I’m pretty sure that it doesn’t matter.

Okay. She says, do you remember the boy with the broken arm? Well he had just broken his arm. Did the Dad break his arm? No. She doesn’t know how the boy’s arm broke. But the Dad took the boy to the hospital, which was in a town a few hours away. And the mother of the boy was angry because the father went without her. So she got on a bike and started riding to the town. She ended up riding into the night. The dad and the boy spent the night in town. And when the dad found out that the mother wasn’t in the house, had left it, he began to assume that she was having an affair. Since it is illegal, in Senegal, for a woman to have an affair, the man called the police and asked to have her arrested. The police found the mother, arrested her, and put her in jail. The mother was livid, and supported by her family, because she had been in jail and accused of having an affair when, as she claims, it is the father having the affair, multiple affairs actually. The big man who appeared and parted the crowd was doing a little community mediating; a common role for the village leader.

First, I feel relief that it was beyond not only my French, but also my English comprehension to have understood this story the first time it was told to me.

Second, I ponder for a moment; I try to imagine my neighbors encircling my marital spat while the mayor mediates and a taxi driver waits. But I can’t. Because I don’t know who my mayor is or even who my neighbors are, and the thought of any public transport attendant paying attention to anything aside from the clunk of my quarter is just unimaginable. Let us not even get to the implications for half the general American population, including a lengthy list of past presidents, if it were illegal to have a marital affair in the United States. Although, I’m pretty sure it is only illegal for women to have affairs in Senegal, and in that case, Bill at least, in this dawdling daydream, is cleared.

But where are we going with this story? Have we arrived at anything? A destination, finale, ending, enlightenment or conclusion?

No we haven’t. And never do we. I’m exhausted with this ride. Aren’t you?

And so I slam the door and let the end of this story wind off into the darkness into which our taxi disappeared that night.